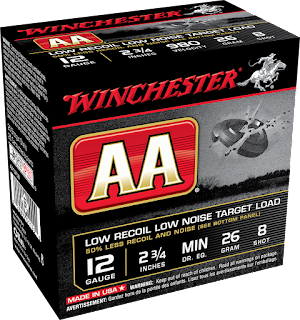 In a recent Sensible Self-defense shotgun match, one of the female competitors suddenly began having intermittent failures to eject with her Beretta 1301 Tactical shotgun. This caused her a great deal of frustration as your might imagine. As we were exploring the cause, I initially wondered if the shotgun might be dirty or if she was failing to exert enough resistance to the shotgun’s recoil.

She said her 1301 was essentially new and the she had only fired it during a recent Range Master shotgun class which typically is 200 rounds. She said she had not cleaned the shotgun since the class and that it had worked fine during the class so I didn’t think a dirty gun was the culprit.

I then looked at her stance and asked her to fire a few rounds. Some of the shells ejected, some did not. I asked what type of ammunition she was using and she stated she had switched to some Winchester AA target loads that she had just purchased at the range that morning. I initially didn’t think the AA loads were the problem because I have literally fired thousands of AA target loads through my Beretta 1301 without a hiccup.

As I continued to eliminate variables, I tested some of her AA target loads through my 1301 and immediately began experiencing intermittent failures to eject. I asked to see the ammunition box and learned something new—Winchester manufacturers a AA round they characterize as a “low recoil, low noise” target round. The specifications on the box stated that Winchester loads the round with 26 grams of shot and a “Min” dram equivalent. Given that I had no idea what the gram to ounce conversion was at the time and was equally clueless concerning what I presumed was the minimum dram load, I looked at the velocity. (See below for more information on the term dram equivalent).

The box indicated a velocity of 980 foot per second (fps) which was the lowest I had ever encountered in AA ammunition. We switched to a more common load of 1-1/8 ounce of shot and a 2-3/4 dram equivalent load at 1145 fps. She finished the match without any additional failures to eject.

Prior to that morning, a velocity of 1145 fps was the slowest Winchester AA round I had encountered and these functioned fine in my Beretta 1301. A little research demonstrated that 26 grams of shot was 0.917 ounces or almost 10% less that the typical “lightly” loaded 12 gauge target round with one ounce of shot—I’m guessing Winchester used a gram weight measure to hide this fact. I presume the min dram equivalent specification was the amount of powder needed to get .917 ounces of lead moving at 980 fps.

The Winchester low recoil, low noise AA loads would be pleasant to shoot in a pump or other manually operated shotgun without a doubt. However, very lightly loaded shotgun shells may not successfully function in gas operated or recoil operated semi-automatic shotguns. When you purchase shotgun ammunition for training, ensure that the shot weight is at least 1-1/8 ounce and the stated velocity is a minimum of 1100 fps if you plan to run them through a semi-automatic shotgun.

Manufacturers currently load modern shot shells with smokeless propellants and these powders weigh much less than black powder for a given volume; however we still use the dram equivalent measure. If my math is correct, a 2-3/4 dram equivalent would equal approximately 0.17 ounces of black powder while a 3-1/2 dram load would be almost 0.24 ounces. I have some Remington #000 buckshot loads that are 3-3/4 dram equivalents and you certainly notice the recoil when firing these loads.

Posted by Sensible Self Defense at 1:23 PM