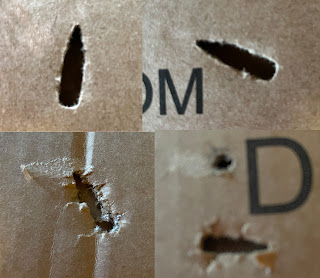 As I was processing the targets from yesterday's SSD Special Match, I noticed a number of .223/5.56 bullet holes that were a perfect silhouette of a bullet. This means that the bullet was tumbling when it passed through the target.
Typically this is caused by either the barrel not stabilizing the bullet (i.e. the barrel is shot out or the twist is incorrect for the bullet weight) or the bullet striking something.
It is possible that the bullets were striking a flash hider, muzzle brake, or a baffle in a suppressor. There were no other intervening obstacles.
It is also possible that the shooter's barrel was the wrong twist for the bullet they were firing. For example: a 55 grain bullet in a 1:6" twist or a 62 grain bullet in a 1:16" twist.
At one point in my military days, I would often see this with M-16s that had the barrels shot out. At 25 yards the bullets struck the targets sideways. It was a great hoot firing them on full auto, shooting bullets like little buzz saws--they would really chew up the targets.
Posted by Sensible Self Defense at 7:28 PM No comments: 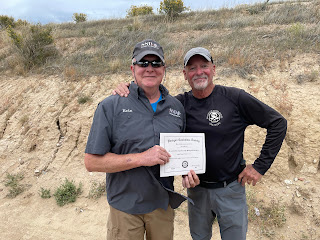 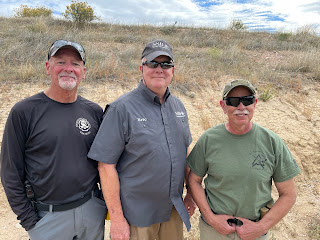 Posted by Sensible Self Defense at 8:58 AM No comments: