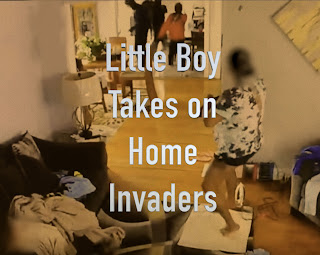 We recently fired a stage in the Sensible Self Defense Short Range Match that was based on a home invasion in Indiana.  Four men armed with handguns forced their way into a home after kicking in the kitchen door. The son of one of the residents, four year old David picked up his toy trucks and threw them at the home invaders and began to hit the men. The boy’s actions startled them and they quickly exited the home, leaving empty handed.

Short Range Match stages like this one are generally based on real life events that are video recorded.  You can watch an edited version of the invasion video here and a video of me shooting the stage during the match here.

During the match one of the men in the squad I was on commented to me that “this would be the perfect stage for a pistol caliber carbine.”  I asked him if he carried his PCC with him in the house and he said he did not nor did he carry a pistol.  I told him I always had a pistol on me when I was at home. He said that seemed a bit paranoid and asked if I lived in a bad neighborhood; I replied that I lived (in so far that there is such a thing) in a safe neighborhood. I asked him when he was most likely to experience a home invasion. He replied “at home?”

Obvious answer.  Most people are not prepared for home invasions and are caught off guard.  Your pistol is a piece of emergency equipment and it is useless if you cannot access it quickly in an emergency.  I routinely read of people trying to access their firearm during a home invasion—many successfully, many not.  It is impractical to carry a PCC with you at all time while in the house or most other places for that matter.  However, you can carry a small pistol or revolver in a proper pocket holster without much inconvenience and the time required to access your pistol is significantly reduced.

Would be home invaders can kick open most residential doors in a few seconds. Reinforcing your doors helps buy you time if that option is available and within your means. The Armor Concepts door armor and similar products are relatively inexpensive, simple to install, and make kicking a door much harder.

If you enjoy reading these you can subscribe via the button on the top right.  Your information will not be sold and you will only receive an e-mail alert when I post articles.

Posted by Sensible Self Defense at 8:00 PM No comments: