Can You Stop a Trigger Pull? 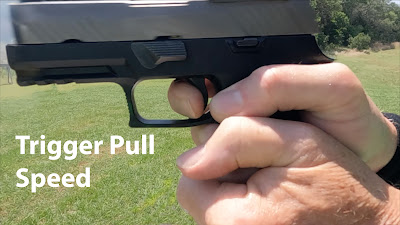 Is it possible to stop an action once you begin? Obviously, the answer is yes for some actions, perhaps no for others. Could you stop an involuntary eye-blink in mid blink? Can you stop a trigger pull once you have actually started the pull? Some experimentation I have done recently concerning just how fast one can pull the trigger leads me to believe that once you actually start to pull the trigger, you probably could not stop in mid pull. If true, that has implications for the private citizen involved in a lawful use of deadly force.

Prosecutors have criminally charged police officers when the officer has shot someone in the back or when the officer shot someone falling down, stating that these shots were unjustified. There is a fine line between shots that are a lawful response to a deadly threat and shots that are fired after the deadly threat ceases. The same is true for a private citizen—perhaps more so. Dynamic, deadly encounters can happen very quickly and a private citizen’s use of deadly force in lawful self defense can be over in moments. However, close legal scrutiny on the defender’s decision to start and stop shooting can result in the aftermath taking years to play out.

Research has shown that most people can stop an action that they had just started but have not completed in 200 – 250 milliseconds (see reference #1). However, the ability to stop an action in this timeframe implies that the initial reaction and motor movement to complete the action takes longer than 200 ms to complete. An action that takes less than 200 ms to complete probably cannot be stopped.

Just how fast does this happen? My recent experiments indicate that it is surprisingly fast—much faster than I initially thought possible. We had four participants in the experiment: Two IDPA 6-gun Masters, one intermediate-level shooter, and one participant who was shooting a pistol for only the 2nd time in their life. The task was straightforward and used one of two starting positions. Position #1 began with the trigger fully forward, trigger finger touching trigger, and no tension on the trigger. The participant pulled the trigger straight to the rear as fast as they could in one smooth motion without pause until the pistol fired. Position #2 began with the trigger staged to the rear so that the trigger had no slack and the shooter felt the sear’s resistance. Shooters could put as much tension as the mechanism allowed without releasing the sear (note: no participant fired an unintentional shot during this process).

On their own, the shooter pulled the trigger straight to the rear as fast as they could in one smooth motion without pause until the pistol fired. In all of the trials, I used the a SIG P320 with a stock trigger and the a P365 with a stock trigger—the same pistol for each participant. (I tried this previously with different pistols and realized there was a notable difference time-wise between action types, even with striker fired pistols. We used the SIG P320 and P365 to eliminate this variable.)

I measured the time from the first video frame indicating the trigger was moving until the pistol fired. I used a camera running at 240 frames per second (the fastest camera I have) to measure the trigger pull speed. Although 240 fps seems fast, it was clear when I analyzed the data that there was actually movement in this process that was faster than the camera could record. Even so, I think the video was sufficient to measure the action with a reasonable level of accuracy. (a short video and no, that grips is not my normal grip. I modified the grips to ensure I could record the entire trigger movement.)

SIG P320: From position #1 with the trigger fully forward, the average time for all participants to complete the trigger pull with the P320 was 0.0297 seconds. The fastest time was 0.0208 seconds with the slowest being 0.0375 seconds.

From position #2 with the trigger staged to the rear and under tension, the average time for all participants to complete the trigger pull with the P320 was 0.0153 seconds. The fastest time was 0.0083 seconds (several pulls—pretty darn fast) with the slowest being 0.0250 seconds. Initially, I thought that the 0.0083 times were simply too fast to be credible; however, another camera running at 240 fps produced the same result.

SIG P365: From position #1 with the trigger fully forward, the average time for all participants to complete the trigger pull with the P365 was 0.0297 seconds. The fastest time was 0.0083 seconds as well with the slowest being 0.0333 seconds.

From position #2 with the trigger staged to the rear and under tension, the average time for all participants to complete the trigger pull with the P365 was 0.0145 seconds. The fastest time once more was 0.0083 seconds and the slowest was 0.0167 seconds.

When you look at the total data set for each starting position, there really is almost no statistical difference between the skilled and relatively unskilled shooters. Every trigger pull I recorded was significantly faster than 200 ms and this leads me to believe that it would not be possible for the participant to stop the pull once they had started.

What is the implication for the armed citizen? If you are committed to firing a shot and have started to pull the trigger, the speed with which you can pull the trigger likely precludes stopping that action. In 2000 and again in 2009, Bill Lewinski and others studied how fast someone can turn and how fast someone can stop shooting (reference 2 & 3). In the 2000 study they found that the average time for someone to turn in scenarios where the threat was firing at a fictional “police officer” was 0.0300 seconds from one starting position and 0.0900 seconds from another. If the threat turns in the instant you pull the trigger, the trigger pull speed when combined with turning speed (particularly the speed of a young, athletic person) could easily result in shooting the threat in the back.

Given that at any given moment in our lives today we are probably being video recorded, that video recording may show the threat turning away as you fire making it look like you are intentionally shooting them in the back when they are no longer a threat. Knowing trigger pull speeds and the speed in which someone can turn could be very useful information for the defense in case of criminal charges.

2. Why is the Suspect Shot in the Back? Finally, Hard Data on How Fast the Suspect Can Be In 11 Different Shooting Scenarios; Bill Lewinski, Ph.D.; The Police Marksman November/December 2000 pgs. 20-­‐28

Posted by Sensible Self Defense at 7:23 PM No comments:

Knickknacks on Your Pistol?

In a recent match, a competitor using a P320 had his pistol slide spontaneously disassemble itself. The rear slide cap failed as the pistol fired and released the extractor tension pin, spring guide, spring, and extractor—all of which departed in various directions (in the first picture below, you can see the extractor tension pin and other parts coming out of the pistol slide). Once the competitor located all of the parts, we examined the rear slide cap and noticed a slot on the right side that was either worn into the slide cap or had resulted when the metal failed (see second picture below).

The rear slide cap had an image of some sort on it and I believed it was probably an after-market add on since it was noticeable lighter than those I had handled previously (I am a certified SIG P320 Armorer). I asked, and the owner said he believed it was a factory part that had subsequently been engraved with the image. The competitor later verified that it was not a SIG factory part but rather an after-market addition made out of a fairly soft metal, probably aluminum. SIG factory rear slide caps are steel and will attract a magnet. I examined several factory slide caps that have been through literally many thousands of rounds and there was no wear at all in that area.

I personally have no interest in putting knickknacks on serious weapons. I have no issue with after-market parts that enhance the weapon’s shoot ability or function such as replacement sights, trigger upgrades, or other additions that do not compromise function or safety. However, after-market parts that perform a critical function must be at least as strong and of the same or better quality than the factory part. If it is not, why replace the factory part?

The competitor is fortunate that the pistol failed during a pistol match and not during a self-defense incident. The pistol was effectively disabled when the rear slide cap failed. Replacing factory parts with substandard, after-market parts that serve no function other than being ornamental is clearly not a good idea. Regardless, you should periodically inspect every critical part on your pistol, factory or not.  I have personally had P320 extractors fail, Glock front sights fall off at the worst possible moment, XDM rear sights break, 1911 plunger tubes fall off -- the list goes on.

Posted by Sensible Self Defense at 12:14 PM No comments: