Research indicates that criminals often choose the darkness or low light conditions to pursue their nefarious profession. A significant number of shootings involving police officers happen at night as well. Criminals view darkness as an asset and use it as an advantage against those whom they would victimize. These realities mean that if you are forced to defend yourself odds are it will be under low light conditions; however, few people pursue low light training even where the opportunity exists.

We’ve finished the Low Light Classes and practices for the year. Although shooting accurately with a flashlight is much more challenging than simply using a normal two-handed stance, our shooter’s improvement over the past several years is impressive. Accurate shot placement is becoming the norm rather than the exception.

This session we fired the modified Texas LTC qualification course. We stayed within Texas LTC time limits; however, we used an anatomically correct picture target and scored based upon the hit’s probable effectiveness (i.e. central nervous and critical circulatory system hits counted higher that lung hits). In some cases, this meant that a shooter who didn’t have a perfect group actually earned an acceptable score. Shooters started all strings of fire with flashlight in hand, drawing from the holster with the exception of the 2 second strings.

The second qualification was the Texas Department of Public Safety qualification course. This course of fire is much more involved and challenging than the LTC qualification with some movement, reloads, and distances out to 25 yards. (see video)

We’ve learned that practice shooting and manipulating the pistol with the light in hand and recovering the light dangling from the lanyard (reloading) is crucial. Happily, this can be done in daylight on the range and in our dry fire practice. Although shooters initially tend to discount the Rogers/Cigar/Syringe (call it what you wish) technique, they often find that it is necessary to use it while shooting around the side of cover to prevent unacceptable reflection.

You must practice low light techniques to have any hope of
using them under stress. As we’ve discovered, students simply don’t master the low light techniques from class--you cannot practice it once and get it down pat. Using a light in conjunction with a handgun is difficult and it requires practice. Thankfully you can practice the techniques with live fire during daylight if your range won’t allow night shooting.

So how do you practice engaging multiple and shooting on the move with these techniques? If your local range has IDPA matches, shoot the course of fire using your flashlight if the match director will permit it. Your score won’t win the match; however, you will learn how to shoot and manipulate your pistol under some stress. Practicing how to search a structure (like your house when nobody is home) in the dark is important as well. Do this with AN UNLOADED PISTOL (check it 3 times!). This helps you identify how the various angles and corners in your house make one technique a better option than the other.

There are several reasons to use a flashlight: to observe and detect, to illuminate and navigate, to eliminate anonymity, and to identify and engage threats. Used properly, a flashlight lets you see danger before it can affect you and it can encourage the danger waiting in the dark to go elsewhere.

Posted by Sensible Self Defense at 3:40 PM No comments:

If it Falls, Let it Drop!


An oops. We’ve all had them and will likely have them again. I was shooting at stage at the Short Range Match and was drawing my pistol from concealment. I normally carry with a loose-fitting shirt and the shirt tail out covering the pistol so that is how I was shooting the match. The proper way to draw the pistol concealed in such a fashion is to acquire a grip on the shirt with your hands positioned on either side of the pistol, lift outward and upward as high as the shirt will go (ripping shirt and buttons as necessary if you are drawing the pistol to defend yourself). Release the shirt with your primary hand while holding the shirt up with your other hand. Obtain a solid firing grip and draw the pistol.

Note I said outward, and then upward—not straight up. Although I have drawn pistols carried this way literally thousands of times, this time I did not draw the pistol properly. I grabbed the shirt and then vigorously pulled it upward. My analysis of the video of this somewhat less than stellar moment leads me to believe that the shirt cupped around the butt of the pistol and as I pulled the shirt up it drew the pistol upward as well. This pulled the pistol far enough out of the holster that it began to tilt forward, rotating as it fell to the ground. The pistol in question, a S&W M&P is “drop safe” and my carry pistol is mechanically sound so the pistol did not fire.

If it Falls, Let it Drop

If you happen to lose control of your pistol while it is in your hand or if it falls out of your holster or your hand during a draw, let it drop. It is extremely dangerous to try and grab the weapon in the air. There is a chance you will get tangled up in the trigger and pull the trigger in the process causing the pistol to fire. This is a training issue as the natural response for most people is to try to catch something they fumble as Robert Evans did when he dropped his cell phone and a shotgun moments after confronting a thief on his property. 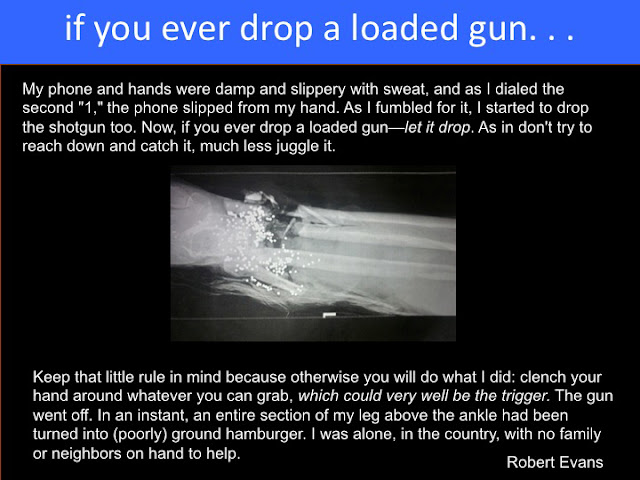 I mentioned that the S&W M&P is “drop safe.” The vast majority of modern handguns have this “safety” which prevents inertia from driving the firing pin or striker forward and slamming it into the primer. This helps prevent accidental discharges if the gun is dropped. The picture below shows 3 pistol brands (l-r Glock, M&P, XD) and the drop safety for each. The devices on these pistols prevent the striker from hitting the primer unless the trigger is fully to the rear. The XD design on the right shows the drop safety in relation to the striker—in the picture it is engaged. Other pistol manufacturers have solved this problem in different ways.

Some pistols are not drop safe. Many of the older mechanisms that John M. Browning designed are remarkably similar and are not drop safe. The 1911 is sometimes drop-safe and sometimes not depending upon which variation of the design the manufacturer is using. The Colt Series ’80 and later Series ’90 are mechanically drop-safe due to an internal firing pin lock that the trigger system actuates. The 1911 pistols from Para USA pistols use the same Colt safe system, Sig Sauer 1911 pistols use it as well. Kimber uses an internal firing pin safety for its 1911s that works off the grip safety.

“Longtime SWAT Magazine Contributing Editor Steve Malloy was killed in a tragic shooting accident at his home on April 16, 2009. As best as can be determined, Steve had a pistol in his waistband and when he bent over to tie his shoes, the pistol fell onto the floor and discharged—the bullet struck Steve in the chest. He was found in the garage, apparently trying to leave the home to summon aid.”*

When I dropped my pistol, I had it in a holster—this didn’t stop it from falling to the ground. If you simply put the pistol in your waist band you are all but guaranteeing that you will drop it at some point, perhaps with tragic results. Use a good holster.

A quick word about belts

I cannot count the number of times that I’ve seen shooters in matches and students in classes trying to get by with wearing a handgun on a flimsy department store belt. This usually leads to discomfort and dissatisfaction with the holster’s performance when in fact the challenges the shooter is facing are the result of a flimsy belt. A department store may belt may be of good quality and hold your pants up perfectly; however, it is not designed to bear the weight of a handgun and spare ammunition.

Beyond creating (or magnifying) discomfort, a flimsy belt will not provide the stability necessary for the holster to function well. A weak belt will often allow the butt of the handgun to lean out away from the shooter's body and under certain circumstances allow the pistol to drop free.

Consider it an unwritten addition to the four rules of gun safety: never try to catch a dropped or falling gun. You should just let a loaded pistol fall if you drop it. If it is a modern design in mechanically sound condition the odds of it firing as a result of the impact are infinitesimal compared to the odds of you accidentally pulling the trigger trying to catch it. If your pistol is not drop safe perhaps it is time to upgrade to a modern design.

If you would like to read similar discussions, subscribe at the link in the upper right corner of the page or see:

Tap, Rack--Or how Not to Blow Up Your Pistol

To train with Sensible Self Defense click here for more information

Posted by Sensible Self Defense at 1:15 PM No comments: