Shotgun Woes and Lessons Learned from the Short Range Match 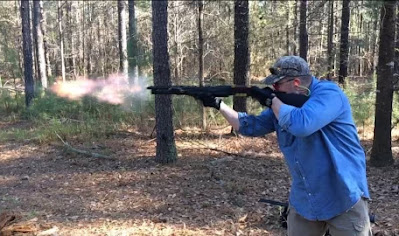 This is a guest post from Dixon Gunther who attended our 29 May 2022 Sensible Self Defense Shotgun Match.

I’d just returned from a work trip when I noticed that Sensible Self Defense was hosting a Shotgun Match. Still reeling from the twelve previous hours of ‘planes, trains, and automobiles’ that tend to bookend my frequent work trips, shooting a match the following morning wasn’t exactly what I’d had in mind. Which brings me to my first point. Never pass up an opportunity to train. Ever. Doesn’t matter how tired you are or how bad the weather is supposed to be. Always go train.

I knew it’d been a minute since I’d run a shotgun defensively, so the next morning, I sorted my gear out, and headed for the range. These ‘matches’ (‘Short Range Match’) as the host/founder, Eric Lamberson of Sensible Self-defense titles them, have consistently proven to be excellent opportunities to run through real-world defensive shooting scenarios using either your EDC or home defense set-ups. I’ve been shooting them periodically for the past eight years. In this match, shooters could use pistol, shotgun, or pistol-caliber carbine. There were four scenarios, with 3-9 targets at various distances, all of which had to be engaged using cover where available, against the clock. Some mandated reloads, with others you just reloaded as you deemed necessary.

During the first scenario, I experienced a total malfunction with my shotgun on the second shot. The shotgun is a Mossberg JM-Pro, which I’ve used extensively in the past. I attended Eric’s Defensive Shotgun Course, modeled after Tom Givens’ course in January 2020, and had run the same gun with same ammo with zero issues. I was using Federal Law Enforcement Flight-Control buckshot. When I fired the first shot, the gun cycled, but failed to fire the second round. I racked the slide, ejecting the unfired second round and loading a third round, attempted to fire – nothing. While the gun would fire the first round loaded into the chamber, it was failing to cock the hammer on the subsequent shots. After repeatedly performing immediate action to reduce the malfunction to no avail, I informed the Safety Officer that I was going to use my backup gun.

I wound up shooting the entire match [clean] with my Mossberg 500 which I’ve had for 38 years. It worked flawlessly. And it was good to refresh myself on running the slide action. I focused on achieving solid target hits, use of cover, and even ran the gun on my non-dominant side for part of a stage in order to negotiate the corners properly.

I say again: Never pass up an opportunity to train. Ever. Doesn’t matter how tired you are or how bad the weather is supposed to be. Always go train. Reading about it and thinking about it are no substitute for actually running your life-saving equipment and actually practicing your skills.

Run your gun: Not to be overly dramatic, but this match could have literally saved my life, as the malfunction I experienced with what had been my home defense shotgun could have gotten me killed in a home invasion scenario. You should periodically practice with the gun and defensive ammunition.

Six shots is not a lot in a gunfight, particularly with no way to truly execute a speed reload (as you can with a revolver or pistol). One of the stages in this match had nine targets, each of which had to be shot twice – 18 rounds total, engaged from cover or while moving. Even reloading twice from cover after engaging the first six targets, that still required me to reload on the move prior to engaging the last three targets. My Mossberg 500 has an 18.5” barrel, and an unplugged magazine capacity of five rounds, for a maximum of six rounds in the gun. With five additional rounds carried on the side of the receiver, that brings my maximum round capacity to 10 on board. One of the features that initially attracted me to the 930 JM Pro was the 9-round magazine capacity, which enabled me to carry 9+1 in the gun, with an additional five on the receiver for a total of 15 rounds. But in the final analysis, I believe the 930 is too long to be practical as a defensive platform. The shorter 500 is much handier.

Reloading: Should be done the same way, from the same place (either on the ‘side saddle’ or on the body) EVERY SINGLE TIME! Though I had previously trained fairly often on reloading a shotgun in a defensive scenario, it has been nearly two years since I’ve practiced with any regularity. Prior to that I had literally shot tens of thousands of rounds with various shotguns, mostly shooting Sporting Clays and dove hunting. With the latter, I’m typically loading two rounds at a time from a belt-mounted cartridge pouch/shell bag. So running the gun defensively, I discovered my skills were at best rusty, and at times down right awkward. During the match, I generally had time to plan my reloads and at least rehearse them mentally, which helped, but it was still far from smooth. This is a skill that you must practice periodically – even dry/with dummy rounds. As I have learned in the past: you can’t expect to remain proficient at skills you don’t practice.

Concerning the specific model of firearm and the nature of the malfunction I experienced: A cursory internet search of the various Mossberg 930 forums yielded a plethora of shooters that had experienced the identical (and many other) problem(s) with this particular platform. While I am still in the process of diagnosing problem. The cause is not immediately apparent; the firing pin isn’t broken and the gun is clean, properly assembled, and has no missing or obviously broken parts – my confidence in the platform has evaporated.

From what I can ascertain, the Mossberg 930 JM Pro was introduced as an entry-level shotgun for use in 3-Gun competition, and was not specifically designed as a serious defensive platform (read: expected to be inherently reliable). I base that observation on the fact that (if the internet forums are accurate) many, if not most 930 owners have had to modify their shotguns just to make them function, and continually ‘tweak’ them or tinker with them to keep them running, irrespective of variant -- SPX, JM Pro, or Pro Waterfowl. My personal experience bears this out.

I own two Mossberg 930s, the JM Pro as well as a 930 Pro Waterfowl. I’ve replaced a number of internal components with “upgrades” (“performance” parts from OR3Gun) just to get them to run, but continue to have reliability problems with both. I selected the Mossberg 930 based on the the tang-mounted safety, which is easier to manipulate as a left-handed shooter (I’m cross-dominant – right-handed, but fire long guns left-handed based on eye dominance). While I’ve owned six Mossberg shotguns since about 1979, five of which I still own and shoot, Mossberg’s forte seems to be their pump shotguns. In my opinion/experience, the Mossberg 930 shotguns, at least the two that I have, are too unreliable to serve as a defensive shotgun, and as mentioned previously, the JM Pro is probably too long to be practical for such use.

The two semiautos that seem to ‘rule the school’ at the moment are the Beretta 1301 and the Benelli M4. The latter of the two is almost prohibitively expensive, and are somewhere between difficult and impossible to locate locally. Semiautos are definitely faster, as you obviously don’t have to cycle the action yourself. Eric shot one stage clean with his 1301 – five targets in 2.36 seconds. I shot the same stage clean with the 500 in something more like 11 seconds. But my personal experience this past weekend has me internally debating the appropriateness of a semiauto as a defensive platform. I’m almost inclined to favor the simplicity and reliability of a pump over the speed of the semi. I have a Remington 11-87 that I bought new in 1989, that I’ve hunted with for the past 30+ years, which has functioned flawlessly with me seldom doing more than swabbing the bore and feeding it ammo. That, and I could literally buy 3 Mossberg pumps for what it would cost me to buy a Benelli. We’ll see. At the moment, my 500 has replaced my 930 as the one by my bedside.

Side Note:  On 30 May 2022 I taught a Home Defense Shotgun Course and one student using a JM Pro had the exact same problem. He made it through by pulling the bolt partially to the rear without ejecting the round.  This cocked the hammer and enabled him to fire the next round.  Obviously not an optimal solution.

Posted by Sensible Self Defense at 8:30 PM No comments: