Don't Get Shot: Intervening in an Active Killer Incident

On Monday 21 June 2021, Ronald Troyke decided he was going to kill police officers. Troyke left a note in his residence outlining his desire to “. . . kill as many Arvada officers as I possibly can.” Troyke apparently said something to his brother who called the Arvada Police Department (PD) and requested a welfare check. Arvada Police Officer Gordon Beesley and another officer went to Troyke’s residence; however, they were not able to contact him.

Twenty minutes later the Arvada PD received a call about a suspicious person in the Olde Town Square. The department dispatched Officer Gordon Beesley to that call and he arrived shortly thereafter. Officer Beesley got out of his patrol car and walked up an alley to the Olde Town Square.

Ronald Troyke arrived moments later and parked his pickup truck in a parking lot near the Square. Troyke got out of the pickup with a semi-automatic shotgun and ran toward Officer Beesley approaching him from behind. Troyke said something to Officer Beesley and when the officer turned, Troyke shot him twice, killing him.

Troyke then shot out Beesley’s patrol car windows and fired shots into the air. Troyke returned to his pickup truck and exchanged his shotgun for an AR15 rifle and ran back towards the Olde Town Square.

Private citizen Johnny Hurley who was shopping in a near-by Army surplus store heard Troyke’s shots and saw him pass by the store.  Eye witnesses said that Hurley exited the store and warned people at a near-by restaurant that Troyke was returning and to get inside. Hurley then ran to confront Troyke and shot him several times, killing him. Hurley then apparently retrieved Troyke’s AR15 and was holding it when a responding Arvada Police Officer encountered Hurley. When the officer saw Hurley holding the AR15 he shot and killed him.

Although the incident surrounding Hurley’s death is extremely unfortunate, I do not believe the responding officer involved in this incident did anything wrong. The Arvada officer responding to multiple 911 calls of “shots fired, man with a rifle, officer down” arrives at the scene to see a person on the ground with another standing nearby with a rifle in hand. The officer’s actions are perfectly understandable given the circumstances.

It is not unusual for Police through a case of mistaken identity to shoot private citizen “good guys” during a chaotic incident. Unfortunately, this tragic turn of events is often due to the citizen’s own actions. A private citizen taking down a depraved killer knows that they are the good guy and expect others to recognize them as such. Of course, the problem with this is exactly what does a good guy look like?

Johnny Hurley’s prompt action in stopping the murderer Ronald Troyke from killing more innocents is praiseworthy and I am in no way criticizing him. We will never know what led him to pick up Troyke’s rifle, perhaps he was trying to remove it out of Troyke’s reach. However, Hurley clearly didn’t understand how officer’s responding to the scene would view him.

So what should you do in similar circumstances? First, move to a good cover position ideally where you can see the bad guy as well as responding police. If no cover is immediately at hand, put some distance between you and the downed bad guy. If possible, you should chose a position from where you can see the police before they see you. You want to present a non-threatening appearance to responding officers; you absolutely SHOULD NOT have any type of firearm in your hand as the police arrive at the scene. Police often shoot the instant they say “drop the gun!”

If you have holstered your pistol but feel that you must have your hand on it due to the potential of a continuing threat of deadly force from the bad guy, slowly remove your hand the instant an officer arrives on the scene. If an officer you did not see confronts you and demands you show your hands, tell the officer: “I’m going to lift my hand without the pistol.” This is one reason I prefer carrying concealed is that as you see an approaching officer you can simply remove your hand from the pistol that is now concealed from view.

As soon as the first identifiable uniformed officer arrives he or she has command of the situation. Immediately obey the officer’s commands without argument or hesitation.

I have introduced police arriving on the scene (photo realistic targets) in some of my training scenarios and students often fail to immediately obey the officer’s commands and in more than one class actually shot the officer. When I asked afterward why they shot at the officer they either could not explain why, said they did not see the badge (some targets were in complete uniform), or said they did not hear the officers identifying themselves. All of which I’m sure was true. If you do not practice something, it is unreasonable to expect that you will suddenly perform it well under stress—even the artificial stress of a decision-based scenario.

Posted by Sensible Self Defense at 8:33 PM No comments:

The SSD Short Range Match: An After Match Report 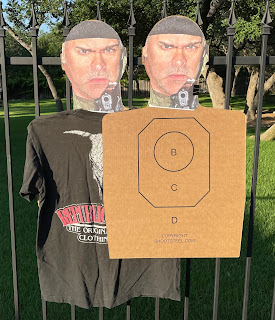 We held our monthly Sensible Self Defense Short Range Match on 13 June 2021 and the match went very well. We had 22 shooters with five shooting a second gun for a total of 27 scores. The match required a total of 81 rounds assuming no misses, so the shooters had to fire a minimum of 2187 rounds during the match. Total dropped points for all shooters for the match was 544 points.

We use IDPA classification standards to enable the shooters to make an apples-to-apples skill comparison.  IDPA-ranked shooter skill levels the this match were as follows:

Two years ago we adopted the Shoot Steel target for the Short Range Match as shown below (the picture on the head is a modification we occasionally make to the target). For scoring we count the B & C-zones (upper chest area) and head (above the shoulder/ neck line as down zero and the D zone is down three. We do not have a down one scoring area. A head shot requires the full diameter of the bullet to be inside the target or it is scored as a miss. If the target has the face modification, the entire diameter of the bullet must be within the ocular and nasal cavity scoring lines (and not touching the lines) or it costs the shooter points (+ 2 seconds). 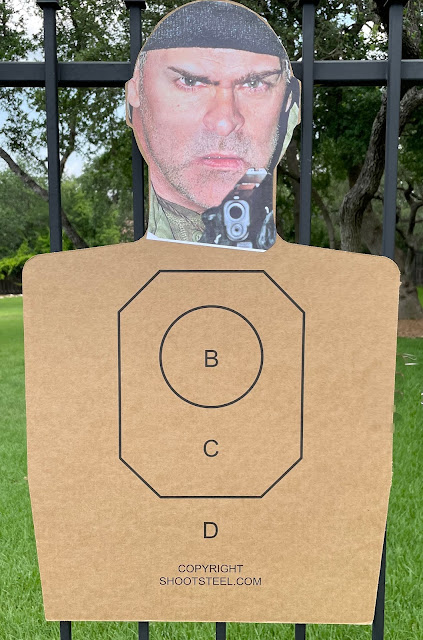 We cover all threat targets (and occasionally non-threats) with T-shirts or other clothing so the shooter cannot see the scoring rings, the taped holes from previous shooters, nor their own hits. If the target does not have the face modification, we cover the head with a mask. This requires the shooters to call their shots because they cannot simply glance at the target to judge whether they should reengage. 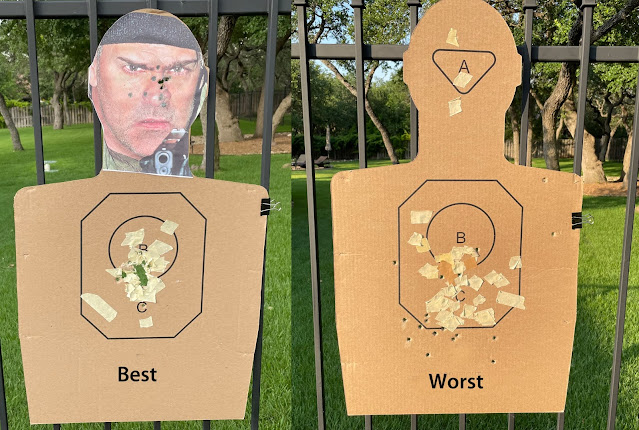 When the target is covered with a T-shirt, shooters aiming for the T-shirt's center of mass will likely hit very low in the down zero area with very little margin for error. If the shooter judges the center of mass from the top of the head to the bottom of the t-shirt they will hit the down zero. Experienced Short Range Match competitors have learned that they must aim just below the shirt’s neckline to reliably hit the target’s upper chest and score a down zero for the shot. 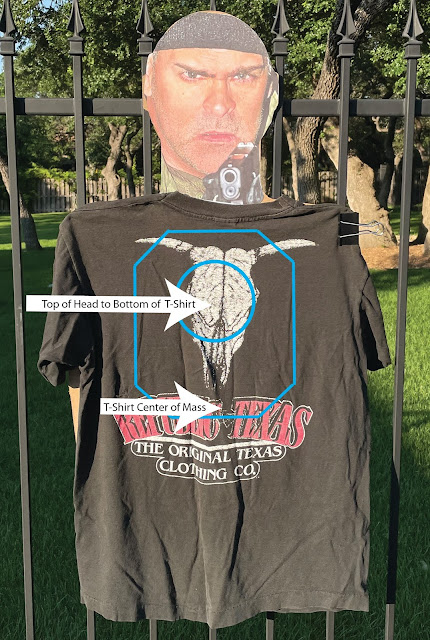 The concept of “aim for center mass” is very nebulous as the center of the available mass very likely will not represent where you need to hit if you are trying to stop a threat. "Aim for where you do CPR" is a much better choice. Square ranges and two dimension targets cannot adequately replicate real world three dimension threats. However, the t-shirts and Shoot Steel targets we use in the Short Range Match represent our attempt to train shooters to aim for a target area that is more likely to result in a threat-stopping hit.
If you enjoy reading these please subscribe. The link is on the upper right side of the page. All that will happen is that you will receive an e-mail when I post an article. Your information will never be distributed.

For more information go to: www.sensibleselfdefense.com

Posted by Sensible Self Defense at 1:34 PM 2 comments: