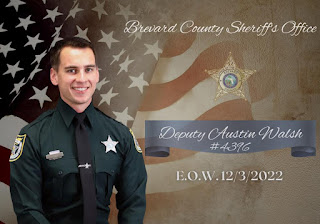 According to Brevard County Sheriff Wayne Ivey, Brevard County Sheriff’s Deputy Andrew Lawson and his close friend and roommate Deputy Austin Walsh were at home playing an online game when the two reportedly took a break. Deputy Lawson picked up a pistol he thought wasn’t loaded and reportedly in jest, pointed the pistol at Deputy Walsh and pulled the trigger, killing him instantly. Lawson called 911 immediately after the shooting. Agents from the Florida Department of Law Enforcement later took Deputy Lawson into custody on a no-bond warrant for manslaughter with a firearm.

Some officials called this incident a “tragic accident.” Did Lawson intend to shoot his roommate? Undoubtedly no; however, this was negligence, not an accident.

1. Treat every firearm as if it is loaded at all times. Are all firearms always loaded? Of course not; however, if we always treat them as if they are loaded our actions are less likely to result in tragedy. Did Deputy Lawson know the status of the firearm he was holding? No he did not.  FAIL!

2. Always point the firearm in the safest direction — this is dependent upon the environment and circumstances. We live in a 360-degree world. A safe direction one minute may not be safe a moment later. It should go without saying, NEVER point a firearm at anyone or anything you are not willing to destroy. Did Deputy Lawson intent to destroy Deputy Walsh? Very likely he did not, yet he pointed a deadly weapon at him.  FAIL!

4. Be sure of your target and what is beyond it. Did Deputy Lawson consider Deputy Walsh a target? Very likely he did not.  FAIL!

Some may consider my comments harsh--I don't.  Firearms are dangerous tools—not toys and must be treated as such. Deputy Lawson presumably received firearms safety training at the academy.  Perhaps he was absent that day.  A moment’s buffoonery resulted in one life lost and another ruined.
Posted by Sensible Self Defense at 12:00 PM No comments: