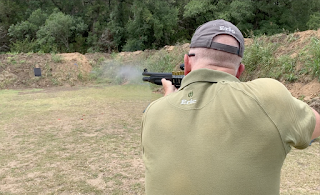 Since I use a shotgun as a home defense weapon, I periodically fire qualifications with my shotguns. It is a good idea to demonstrate and document for record your competence with any firearm you might use for self-defense.

What course should you use? There are several approaches you can take in choosing which course of fire to use to demonstrate competency. For the shotgun, I recommend the Department of Energy (these are the guys that guard nuclear weapons and facilities) Shotgun Qualification course or your state or local police qualification course. The Texas Commission on Law Enforcement (TCOLE) Shotgun Instructor Qualification I discuss below is what police firearms instructors must pass to receive TCOLE firearms instructor certification in Texas.

The Texas Commission on Law Enforcement (TCOLE) Shotgun Instructor Qualification course of fire is actually fairly straight forward and requires ten rounds of buckshot or five slugs and five buckshot. Given the scarcity of premium buckshot at this time, I used the cheaper Fiocchi 9 pellet buckshot.

The TCOLE qualification is fired on the standard TQ19 target with all pellets counted as one point. The shooter must score 90% to pass at the instructor level.

Click on the picture below for a video of the qualification:


I fired the qualification twice, once using a target much smaller than the TQ-19 and once using a B27 target that is closer in size to the TQ19.

My Beretta 1301 is not a 25-yard gun with the Fiocchi buckshot and will have flyers as shown on the cardboard target. Although the wads likely took out evidence of a few hits, I could only account for 78 pellets which was not a passing score. The B27 target contained all 90 pellets which was a 90 or perfect score.

In April 2010 security cameras recorded a violent attack at the Java Gold jewelry store in Houston. Three men robbed and beat the store owner and an employee. Police eventually caught all three attackers.

Mehmood Ghaznavi the store owner armed himself after this robbery and unfortunately was killed in a gunfight with Anthony Parks during an attempted robbery in a separate incident a year later on 6 July 2011. Police found Parks at the scene and transported him to the hospital with a gunshot wound to the right side of his forehead. A jury later convicted Parks of Ghaznavi’s murder and sentenced him to 40 years in prison.


The Short Range Match stage design encourages people to use proper tactics and cover. The match replicates incidents such as the Java Gold robbery on a square range. The Short Range courses of fire seek to replicate real life scenarios where you are more likely to use carry-suitable handguns. The match's guiding principle is to improve concealed carry skills and shooters ideally will use a pistol they carry to shoot the match. All pistols may be loaded to magazine capacity; however, the match may have some reloads on the clock or some malfunction drills. Although this was a static stage, we typically practice a lot of moving to cover during the Short Range Match.

You will notice that the targets are covered with old t-shirts.  I inadvertently learned a few years ago that shooters tended to shoot low when they did not have a reference aiming point--either the ability to see the down zero ring or tape on the target.  They were literally shooting "center of mass." Since then, I frequently cover the target and regulars at the match have learned to raise their aim to the proper, anatomically correct area on the target.

I have also become convinced that the typical IDPA match encourages training scars. Training scars are bad habits, inappropriate, or counterproductive actions that don’t have a basis in proper tactics. Prior to the rule change several years ago, IDPA stages often required shooters to engage targets while moving. This resulted in shooter taking baby steps as they engaged targets. Obviously if someone is shooting at you, chicken walking in the open is probably not a good idea.

Under the current rules, competitors can also engage targets while standing in the open much like USPSA stages. If cover is available you should get to it as fast as possible. Several years ago, Active Response Training published the results of an informal experiment testing the benefits of static engagement, moving and shooting, and using cover.

I’m not bashing IDPA or USPSA; however, if you are interested in improving self-defense skills training with scenarios like those we use in the Sensible Self Defense Short Range Match help. IDPA, USPSA, the Short Range Match and similar contests do train us to shoot under stress and improve our speed and accuracy. The skills we practice most often are the skills we will use if called upon to defend ourselves so occasionally shooting a match using correct tactics is a good idea. You may not win the match, but it will improve your odds if you are forced to draw your pistol to defend your life.

Posted by Sensible Self Defense at 5:52 PM No comments: