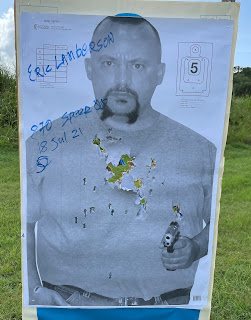 Since I use a shotgun as a home defense weapon, I periodically fire qualifications with my shotguns. It is a good idea to demonstrate and document your competence for record with any firearm you might use for self-defense.

Pursuing that goal, I fired the Department of Energy Shotgun Qualification Course twice (click here for the DOE Shotgun Qualification Course of fire). One time with my Remington 870 pump that has a cylinder bore using the Speer Law Enforcement 8-pellet FliteControl buckshot load and once with my Beretta 1301 which also has a cylinder bore using the Federal 8-pellet FliteControl using the standard DOE target.

The shotgun’s power makes it a great choice for a home defense tool. When you employ it correctly and within its proper range envelope the shotgun is very effective. However, you must know your shotgun's range limitations with the load you are using.

Multiple projectile loads require particular attention to what is behind your target. YOU are responsible for every pellet you fire. This is where target distance and the pattern of a particular load in your shotgun come into play.

Ideally you should pattern your shotgun at 5, 10, 15, 20 yards, and perhaps beyond targeting an 8-inch circle. The distance where your gun with the particular load you are using throws pellets outside of the 8-inch circle is the maximum range for your shotgun with that load.

My Remington 870 and my Beretta 1301 have both patterned acceptably out to 35 yards with the Federal FliteControl in the past. However, I have noticed some erratic behavior from the Federal 8-pellet FliteControl load at times and it causes me some concern.  I will post some additional thoughts after some research.

Posted by Sensible Self Defense at 3:10 PM No comments:

Mystery of the Keyholing Springfield OSP 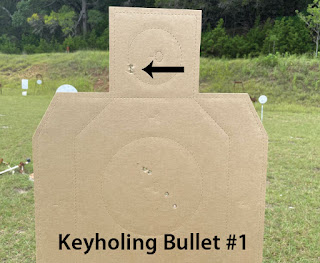 In several recent matches I noticed that my friend’s Springfield OSP pistol seemed to be occasionally keyholing the bullet. Since we were in the middle of a match each time, we could not investigate the issue.

However, in a subsequent practice session my friend noticed a bullet hole that appeared to be a keyhole. Ultimately, his Springfield OSP keyholed two out of approximately 300 rounds fired in the practice session. One occurred within the first five shots he fired that day and one occurred toward the middle of the practice session. In the first instance, my friend called all five shots in the center of a standard IDPA target; however the bullet struck the target in the head so it clearly was not flying true (see picture on the right).

The XD-M’s keyholing was inconsistent with one keyholing bullet spinning on the vertical axis and the other spinning on the horizontal axis. Each time the keyholing shot was clearly not a double hit because we accounted for every shot on the target (see pictures below).

So what is keyholing? If the rifling does not properly stabilize the bullet as it exits the barrel, the bullet will begin to wobble or it may begin to tumble end over end or sideways. When an unstable or keyholing bullet strikes the target it is often rotating/tumbling so fast that it will leave an oblong hole. We call this effect keyholing because the oblong holes sometimes resemble a keyhole.

In a firearm in good repair that is firing bullets designed for that firearm, the barrel’s rifling imparts a spin on the bullet as it travels down the bore. This spin stabilizes the bullet in flight and makes it travel with the nose pointed forward. The optimal amount of spin (also known as the twist of the rifling) is a function of the firearm’s bore diameter, the bullet’s length (a function of the bullet’s weight), and the bullet’s velocity (see the Greenhill Optimal Twist Rate Formula).

Keyholing can result from several causes. It typically happens because the barrel’s rifling twist isn't adequate for the weight, shape and profile of the bullet being used. If the bullet is not spun fast enough going down the barrel, it loses stability before reaching the target and begins to tumble.

Significant damage to the barrel’s muzzle can cause gas to escape past the bullet unevenly as it exits the barrel and result in instability. The barrel’s rifling may be worn out (shot out) and as a result it is not imparting enough spin to the bullet as it leaves the barrel. Leading in the barrel could cause the bullets to fail to properly engage the rifling.

My experience with keyholing firearms is limited to military M16’s with barrels that were clearly “shot out.” With these firearms almost every shot was rotating on the horizontal axis and the holes in the target were almost always oblong.

The pistol in question is a fairly new Springfield XD-M 4.5 inch OSP 9mm with approximately 10k rounds through it (yes, we tend to shoot a lot). The barrel shows no sign of any damage and the rifling is crisp so we do not believe it is shot out.* The Springfield XD-M barrels are 1:10 or one rotation every ten inches which is optimal for the typical weight range of 9mm bullets. There was no leading in the barrel—my friend is very thorough with his firearms maintenance.

The load he was shooting was an Xtreme 147gr plated hollowpoint 9mm bullet loaded with Winchester primers, 3.5 grains of Hodgdon Titegroup** assembled on a Dillon Super 1050. This is a load he has used for at least ten years and it has never presented any issues. He has not changed the load nor the loading process.

Xtreme swages its 147gr copper plated hollowpoint bullets so they are presumably very consistent in shape and weight. It is possible that Xtreme’s plating is uneven for some bullets; however there is no visual indication of this.

At this point, the actual cause of the keyholing behavior remains a mystery. The simplest explanation is that there were some bullets out of specifications. My friend purchased these bullets several years ago in a lot of 17k in a single container. Perhaps some of the “out of spec bullets” just happened to be in that portion of the container. Pure speculation on my part—we’ll see if the keyholing continues.

* I have a Springfield 9mm XD with over 50K rounds through it. It is still acceptably accurate so we don't believe barrel wear is an issue.

** This is not loading data. Always check with the powder company or another vetted source for the proper loading data for a particular round.

Posted by Sensible Self Defense at 5:46 PM 2 comments: