Thugs on a Crime Spree--Walking the Dog

Nationally known firearms trainer John Farnam is noted for a saying: “When its least expected, you are elected.” Garrett and Caroline Scharton were certainly not expecting to be elected when they were walking their dog just after midnight on 22 July 2018. Video shows a black Chevrolet Malibu drive past them and quickly park. Three thugs, two of them armed, jumped out of the Malibu and accosted the Schartons—threatening them with a shotgun and pistol while demanding their valuables. Discovering that the couple only had a cell phone, one thug kicked Garrett Scharton and then the thugs departed.

The thugs in question, aged 13-16 years had carjacked the owner of the Chevrolet Malibu at gunpoint earlier that evening and then embarked on a crime spree that included robbing another man while he was out walking in Oak Cliff, a modest suburb of Dallas, Texas. After the thugs robbed the Schartons, they encountered, robbed, and beat a Domino’s Pizza delivery driver. Mesquite Police caught up with the teens and arrested them following a short chase and found the Scharton’s stolen phone and the thug’s firearms inside the stolen vehicle.

As I began analyzing the video from a self-defense perspective, the shooting problem did not appear to be that challenging for a well-trained defender. I diagrammed and used this incident as a stage in our local Short Range Match (click here for the video) and most competitors had no difficulty with the stage as I had set it up.

Although many pretend that this is not the case, a match environment is very different from the problem that presented itself to Garrett Scharton, even if he had been armed and willing to act.

Let’s look at this incident using Boyd’s Observe, Orient, Decide, Act (OODA)* decision cycle from the Scharton’s and the thug’s perspectives. The thugs have already passed through a full OODA cycle. They have Observed the Schartons, Oriented when they parked the car, Decided to rob them, and are putting that decision into Action. As we analyze the video, it’s clear that Garrett and Caroline are looking at the car as it comes to a stop in the parking space (both Observe). The area is well lit as you can see by the shadows Garrett and Caroline cast.

The thug’s OODA cycle is reset as they exit the car. Thug 1 Observes Garrett’s position, Orients as he removes the shotgun, and then begins the Decide and Act stages as he prepares to use the shotgun. From the first moment that the thug in the back seat behind the driver steps out of the vehicle to Garrett’s initial recognition that the thug is removing a firearm is approximately 0.20 seconds (Garrett Orient). The thug then chambers a round in the shotgun approximately 0.68 seconds later (Thug Act). Garrett clearly reacts to the sound of the thug chambering the shotgun round (Decide); however, Caroline has not reacted even though she is also looking toward the vehicle. It’s possible that due to the angle, Garrett is obscuring her view of the thug with the shotgun and/or she does not hear or does not recognize what she is hearing.

The thug (Decide) aims the shotgun at Garrett approximately 0.46 seconds later and Garrett reacts by beginning to raise his hands (Garrett Acts); Caroline reacts as well by ducking away. Approximately 0.94 seconds later the thug with the shotgun begins advancing toward Garrett and Caroline (thug Act) followed by the thug with the pistol who has probably exited the driver’s door (you cannot see this in the video).

From the moment that Garrett recognizes the threat until the thug begins to walk toward him is approximately 2.08 seconds. Caroline begins screaming (Act) an instant later as the thugs continue to come toward them at what amounts to a quick walk. Garrett backs into Caroline and essentially takes her to the ground. As the thugs approach, Garrett leans over Caroline to protect her, as ineffectual as that might have been. The entire incident takes approximately one minute as the thugs have grabbed Caroline’s phone, returned to the stolen car, and begin to back out of the parking space.

At the instant when Garrett reacts to the sound of the shotgun round being chambered, he is approximately nine feet in a straight line from the thug and 4 feet to the thug’s left (see pic #1). Recognition-Reaction. A well-trained defender in Garrett’s place had approximately 2.08 seconds to recognize and react to the imminent threat of unlawful deadly force before the thug starts to advance. 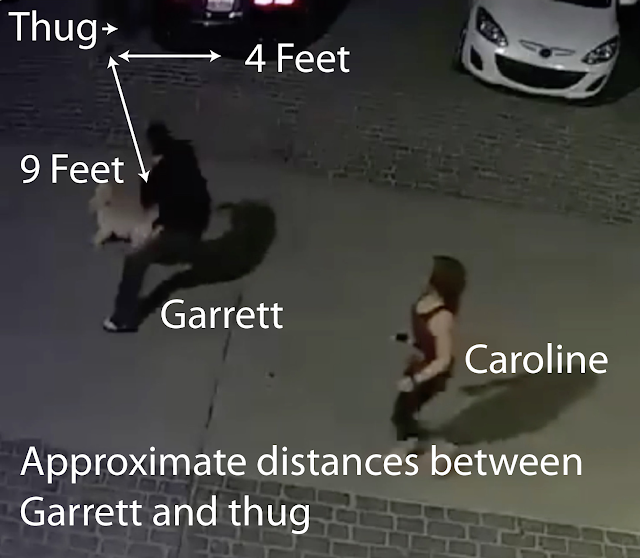 Steve and I replicated the distances and scenario to determine if the hypothetical well-trained defender could have recognized the threat and then reacted with an effective tactic inside the thug’s Observe, Orient, Decide, Act cycle. We recorded each run with a video at 60 frames per second and the observer started a timer to record the time necessary for an observer to detect the shooter’s motion.

For my first run (and this was my first shot fired of the day), I was dressed exactly as I normally dress when going for a walk with my pistol fully concealed under a loose athletic shirt. When I moved off the “X” and began my draw (I started at the Act point in my OODA), Steve started the timer (Observe) approximately 0.25 seconds later. At that instant, I was beginning my draw and finished the draw with the first shot hitting thug 1 (T1) 1.28 seconds after I began. I fired a total of five shots in 0.98 seconds with two good hits on T1 and three hits on T2.

Steve then completed his third run drawing from open carry, hand on the pistol. Steve drew and fired his first shot on thug 1 (T1) in 0.71 seconds; I reacted and started the timer (Observe) approximately 0.24 seconds. Steve fired a total of six shots in 1.09 seconds with three good hits on T1 and three hits on T2. For all three runs, my average split times between shots was 0.20 seconds and Steve’s splits were 0.18. You can see the results of our runs in picture #2 below. 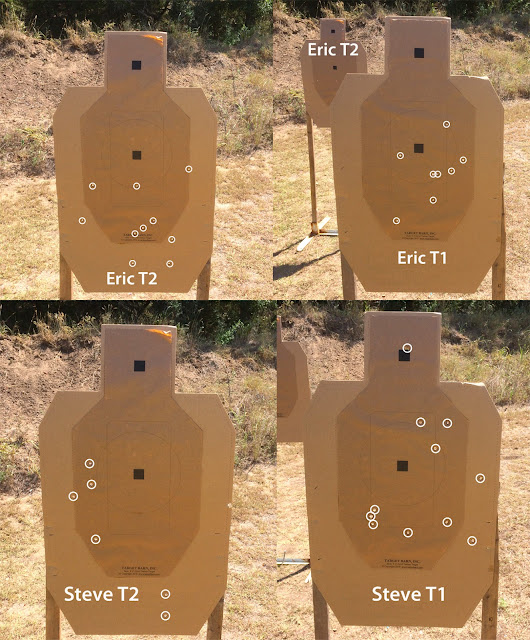 So what does this tell us? Our limited experiment demonstrated that the shooting problem was not that challenging for a well-trained defender. The results of our runs showed that we were able to act and place hits on T1 and T2 likely well before thug 1 would have been able to restart his OODA cycle and react to our defensive engagement. Thug 1’s position would likely have blocked thug 2’s ability to see our initial movement so by the time thug 2 caught on to what was happening, he likely would have been receiving the impacts of our defensive rounds.

This incident unfolded so quickly that I think the greater challenge for most would have been cycling through the OODA loop fast enough.

I suspect that the Schartons were fortunate. Although the incident was clearly traumatic for them, I cannot help but wonder what might have happened if the thugs had been older, perhaps more experienced and had decided that Caroline was the perfect companion for some additional fun at another location.

Garrett Scharton later said about the video of the robbery that “When I listened to what I was saying and how I was saying it, I never heard me be that afraid before.”

You must plan in advance with your spouse or other companions what to do in similar circumstances. Training with decision-based scenarios will help us to overcome that initial fear reaction and hesitation to act. Go through “what-if” scenarios that account for your companion being armed or unarmed as your circumstances dictate. In this incident, the thugs parked the car. Consider possible angles of defensive movement and the thug’s reactions including how the thug could use the car as a weapon. If a car stops behind us do the following, if the car stops beside us, in front of us, etc.

The Schartons conducted several post-incident interviews at the links below that are worth watching.

Update:  I recently spoke to Garrett Scharton concerning the incident and aftermath.  Although the Schartons were the victims of a violent robbery, they did not then allow the "system" to victimize them further through failing to hold the criminals accountable.  The Schartons continued to press for justice until the State of Texas finally sentenced the thug with the shotgun to 25 years and the thug with the pistol accepted a 18 year sentence.

Posted by Sensible Self Defense at 11:00 AM