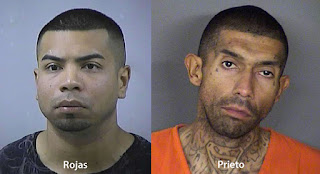 Additional information has become available concerning the attempted robbery and shootings at Rolling Oaks Mall the afternoon of 22 January 2017.  As I mentioned in an earlier Facebook post, a robber now identified as Jose Luis Rojas shot and killed a Good Samaritan identified as 42-year-old Jonathan Murphy.

We now know that Murphy who was in the store with his wife was not armed. Although there were reports that Murphy tried to stop the robbers from fleeing, I now believe those reports were in error.

Mrs Murphy wife stated in an interview that he just stepped between her and the robbers (presumably to protect her) when Rojas shot him without comment.  Photos of Murphy show that he was probably a pretty big guy so it is possible that Rojas thought Murphy was going to interfere with their escape or Murphy simply intimidated him.

A legally armed citizen then shot Rojas as he and his accomplice Jason Matthew Prieto were fleeing the jewelry store.  Rojas was critically wounded and fell in the mall while Prieto began wildly firing his pistol hitting two other bystanders as he fled. Converse Police subsequently arrested Prieto after he crashed a stolen car in Converse.

Some observations concerning this incident. Regardless of how many precautions we take, we can suddenly find ourselves in a dangerous situation. The key to dealing with these situations is mental preparation and training. Taking some time to think about how you would act in a dangerous situation helps you remain calm, be aware of what's going on around you, and be prepared to act if the situation requires action.

No matter how familiar you are with firearms, looking down the wrong end of the barrel is intimidating. If you are facing an armed individual and you are not armed, don't make any sudden, unexpected moves. A nervous criminal may think you are attacking him and respond with violence.  Slow, careful, cautious body language tells a robber that you are cooperating and that you're not resisting or interfering.

In many situations fighting back is not worth the risk. Rojas and Prieto were both mentally and physically prepared to explode into violence to achieve their ends. To go from thinking about the rest of your day or what you are going to buy at the supermarket to the instantaneous action necessary to overcome an armed opponent is beyond most people. However, if you have prepared yourself mentally and have trained yourself physically then you are in a better condition to respond.

One final point.  If you are not in the immediate vicinity of the incident or in immediate danger, the strategy that has the highest survival rate is run from the shots or commotion to the nearest exit. In the Army, we had a saying that the best place to be when there was an ambush was somewhere else. It's hard to get killed if you aren't there anymore. Many people in the mall simply hunkered down were they were and started tweeting or posting about how scared they were.

Posted by Sensible Self Defense at 6:58 PM