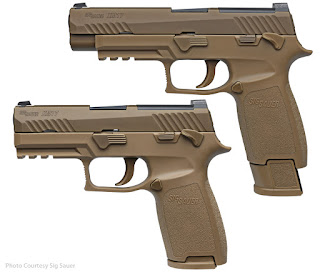 After a number of frustrating years, the U.S. Army has picked its first new handgun. The Sig Sauer P320 pistol is now the M17 handgun and will replace the M9 Beretta.

In 2014 the Army announced a competition for a new Modular Handgun System (MHS) to replace the M9. Twelve companies entered pistols in the competition including the Beretta APX, CZ P-09, FN Herstal's Five-Seven Mk 2, the General Dynamics/Smith & Wesson M&P, the Glock 17 and Glock 19; and the Sig Sauer P320. The Army selected the Sig Sauer and Glock as finalists in December 2016.

Army officials notified Sig Sauer that the Army had selected the P320 at the 2017 SHOT Show in Las Vegas on 19 January. SIG will manufacture all pistols at the SIG SAUER facilities in New Hampshire.


The MHS requirement called for a non-caliber specific weapon with modular features to allow for interchangeable grips to fit different hand sizes, alternate magazine options, an integrated rail for mounting lights, lasers, or other sighting aids, no magazine disconnect, and an external safety mechanism.


SIG modified the P320 to meet the external safety requirement (see picture above).  Even though I was a 1911 guy for many years, I’ve learned that a manual safety is generally an unnecessary addition. I suspect it will become a training issue with troops who have learned to de-cock the M9 and then return the lever to the up position.


SIG reportedly has modified the military version of the P320 to secure the take-down lever so that soldiers in the field cannot remove the fire-control unit from the plastic frame. The military P320’s slide cover-plate at the back will be secured as well for the same reason.


The military P320 pictured in various announcements has the large takedown lever rather than the slim lever that many commercial P320 owners are installing.  I also wonder if SIG has resolved the issue with the takedown lever O-ring that some commercial owners have reported. 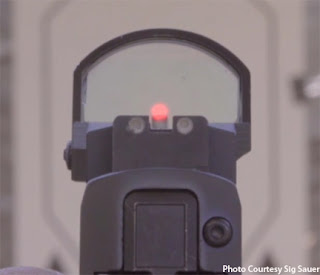 The MHS is a system and SIG will also provide suppressor kits, holster sleeves that will function with the Improved Modular Tactical Holster (IMTH) Blackhawk holster system, and a conversion kit with everything needed for the pistol to fire the M1041 dye marking rounds (similar to the Simunition.® I also noticed that the P320s pictured in the announcements appear to have a the slide milled for a red dot sight. Perhaps red dots are an option as well.


SIG will deliver full size and compact P320’s over a period of ten (10) years. The SIG P320 modular pistol has interchangeable grip modules that permit changing frame size and caliber. This is an interesting feature that will provide the Army useful flexibility if the Army decides to change calibers in the future.

The Army’s selection of the SIG P320 will likely mean more police departments will consider the pistol as well as many more American gun owners. Any gun that can pass the Army’s rigorous tests is worth consideration. I may have to try one myself.


Posted by Sensible Self Defense at 3:52 PM