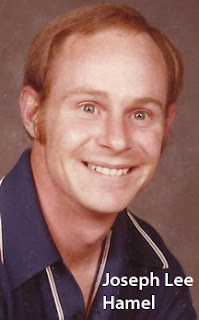 On 31 July 1992, Mary Glissen called her brother Joseph Lee Hamel hysterical and crying and said that she was fearful that her boyfriend, Charlie Brown was going to kill her. Mary and Charlie had a history of physical violence between them including Charlie once holding a loaded gun to her head. She said she was scared to be at the house and asked Hamel to pick up her belongings. Mary admonished Hamel to be very careful because Charlie was carrying a gun in the car and had violently destroyed many of the things in the house.

Hamel and his 67-year-old father Leo went to Mary’s house to pack her possessions. The house looked like a cyclone had been through it with nothing left intact. Hamel began boxing up Mary’s things, using his pocket knife to cut tape in the process. When Hamel left to get additional packing boxes he gave his father an aluminum tire thumper for protection in case Charlie should come back. Shortly after Hamel returned from his errand, Charlie came into the house, approached Hamel, and asked in an angry, threatening tone, “Where is that bitch?” Hamel told Charlie he did not want any trouble and asked him to depart and let them take Mary’s things. As Charlie moved back toward the front door, Leo came into the room holding the tire thumper at his side and also asked Charlie to leave.

Charlie responded and told Hamel that if he did not take care of his father, Charlie was going to shoot Leo. Charlie also said that he had something in the car to shoot him with. Charlie then exited through the front door and headed toward his car which was parked six to eight feet from the door.

Hamel, believing Charlie was going to the car to get a gun, charged Charlie and stabbed him in the stomach. Charlie tried to get in the driver’s door of his car and Hamel, thinking Charlie was trying to get his gun, prevented Charlie from reaching the car; however, as soon as Charlie stopped trying to get to his car, Hamel stopped all aggressive moves toward Charlie. Charlie staggered to a neighbor’s house for help.

The Amarillo Police arrested Hamel and the prosecutor charged him with aggravated assault. During Hamel’s trial, Hamel and his father testified that for several reasons they feared for their lives when Charlie came into the house. They knew about Charlie’s past violence toward Mary and others; Mary had warned Hamel that Charlie would hurt somebody when he was as angry as he had been; Mary had said that Charlie had a gun in his car; the condition of the house indicated that it had been violently ransacked; and about a month before this incident, Charlie had personally told Hamel that he had shot a man and that he had been convicted for being a felon in possession of a firearm. Based upon this knowledge, Hamel believed that Charlie had a gun in his car and intended to carry out the threat he had just made.

However, the jury convicted Hamel of aggravated assault and the judge assessed punishment at two years confinement. Hamel appealed his conviction on the grounds that the trial court should have given the jury instructions on self-defense and defense of a third person. The Texas Court of Appeals acknowledged that whether a defendant is entitled to a self-defense instruction depends upon the defendant’s assessment of the situation and his belief regarding the necessity of the use of force. The court also noted Hamel’s testimony that he believed the victim had a gun in his car and was a threat to him and his father. Nevertheless, the Court of Appeals held that the denial of the requested instructions was not error because there was no evidence that Charlie used or attempted to use deadly force.

Was Hamel’s belief that Charlie was a going to carry out his threat reasonable? The yardstick for measuring “reasonableness” is based upon three factors:

-- What would a reasonable and prudent person have done?

-- In the exact same situation?

-- Knowing what the defendant knew at that time within the mainstream of convention and best practice?

Let’s analyze the totality of the circumstances facing Hamel as Charlie was moving toward his car from the perspective of Ability, Opportunity, Jeopardy, and Preclusion. In order for the use of force to be justifiable under the law, your attacker must have the power — or ability — to cause serious bodily injury or death, the opportunity to use that power, and show a manifest intent to exercise that ability. In some states (like Texas in 1992) a fourth element comes into play – preclusion – or a requirement to retreat from the encounter if it is safe to do so.

Ability is most commonly associated with some kind of weapon, whether it is hands and feet, a gun, knife, ink pen, or effectively any other object depending upon the circumstances. Charlie said he had a gun in the car and Hamel had no reason to think Charlie’s statement was an empty threat given Charlie’s history of violence.

Opportunity is the second AOJ component that must be present to justify the use of deadly force. The person with the ability to attack you with unlawful force must also have the opportunity to do so and be able to do so immediately. Proximity is often an important factor in establishing opportunity. Charlie was going to his car which was close to the home’s front door and with a firearm in hand, Charlie would have had an immediate opportunity to use deadly force against Hamel and Leo.

The third component in the AOJ triad is jeopardy. Jeopardy speaks to the attacker's intent. In order to fulfill the jeopardy criteria, the attacker must clearly indicate through words or deeds that he is going to carry out an attack. Like opportunity, jeopardy must also be immediate to justify the use of deadly force in response. Charlie said he was going to shoot Leo, that he had something in the car to shoot him with, and was in that moment physically going to his car so in this case the jeopardy element was fulfilled. If you wait to see the gun, you are likely to see what comes out of the barrel.

One additional factor that may be combined with AOJ in some jurisdictions is preclusion or a requirement to retreat. Texas at that time was a duty to retreat state and Hamel had to demonstrate that he saw no way to safely retreat and thereby avoid having to employ deadly force to counter Charlie’s unlawful attempt to use deadly force.

During his trial, Hamel testified that he was not familiar with Mary’s house and did not know whether he and his father could leave through the fenced back yard. Charlie was far closer to his car than Hamel was to the back door of the house and Hamel said he did not think he could take a chance on being caught in the back yard with only a pocket knife if Charlie had a gun.

The AOJ and P factors in this case clearly support Hamel’s belief that Charlie was going to immediately use deadly force once he retrieved his gun and that Hamel and his father could not have safely retreated.

The Texas Court of Criminal Appeals agreed and reversed the lower court’s decision stating that Hamel was entitled to a charge on self-defense if evidence was presented which, if credible, showed that Hamel reasonably believed his use of deadly force was immediately necessary to protect himself against Charlie’s use or attempted use of deadly force, and that a reasonable person in Hamel’s situation would not have retreated.

The court observed that Hamel’s own testimony raised the issue of self-defense. Hamel testified that he believed Charlie was going to the car for a gun and that he could not let Charlie get to the weapon and fulfill the threat he had made. Hamel said he believed the action he took was necessary to defend his life and the life of his father and was immediately necessary to protect himself against Charlie’s imminent attempted use of deadly force.

The judges held that given the circumstances surrounding the incident, Mary’s warning that Charlie had a gun in his car, and Charlie’s threat, they could not say that it was unreasonable for Hamel to believe that Charlie was going to his car in an attempt to carry out his threat. The judges also held that the evidence did not support a belief that retreat was a reasonable option given the totality of the circumstances.

The court acknowledged that although Hamel would not have been entitled to a self-defense instruction if his use of force was in response to verbal provocation alone, Charlie’s threat did not stand alone. Charlie’s move toward the car was the physical act that rendered his conduct more than a mere threat.

The Court of Criminal Appeals concluded that Hamel was entitled to a self-defense jury instruction and to an instruction on defense of a third person. Since Hamel properly objected to the charge, the court concluded that reversal was required given that the error was calculated to injure Hamel’s rights as the defendant. Reversed and Remanded.

Posted by Sensible Self Defense at 7:04 AM