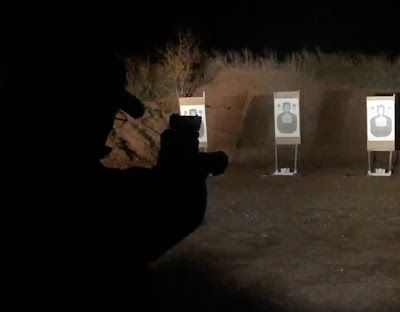 We finished the our Low Light Fundamentals class for winter 2022 with a great group of engaged students. Some might ask why we should learn and practice low light techniques. I suppose the answer to this question depends upon your personal circumstances and perhaps where you live. If you live in a large city where it is literally never dark due to street lights, parking lots, etc., then learning and practicing low light techniques is probably not worth the time and effort. However even though I live in San Antonio, Texas, in my neighborhood there are no street lights and you can easily find yourself effectively in the dark when outside if there is little or no moon. As a result, I find value in practicing under low light conditions.

Low light environments pose additional challenges with a pistol. To be successful in low light conditions, a shooter should have decent mastery of marksmanship fundamentals under normal lighting conditions. A shooter who cannot keep their shots within an eight-inch circle at 7 yards will have difficulty in low light. A problem I have noticed previously and I saw again in this class with newer shooters is a tendency shoot high on the target. Shooters new to low light engagements often subconsciously tilt the pistol muzzle up slightly in order to see the front sight better and end up hitting high or missing the target entirely. Regardless of the lighting conditions, with iron sights you must properly align the sights and then concentrate on the front sight while simultaneously pressing the trigger to the rear without moving the pistol. Hard to do for some under normal circumstances with good light--more difficult to do under low lighting conditions.

Shooting accurately with a flashlight is much more challenging than simply using a normal two-handed stance. Some low light techniques require one-handed shooting or as in the Harries technique the use of a modified Weaver Stance.

How about a flashlight on the pistol? We have had several police officers attend our low light classes and practice sessions and some departments issue pistols with mounted lights. I have no objection to pistol mounted lights and they can make hitting the target much simpler with the proper switch configuration. However, I expect students to master hand-held light techniques since searching with a mounted light virtually guarantees that you will point the pistol in unsafe direction at some point. In class, shooters search with their hand-held light and then they are free to release it and go to the pistol mounted light if they wish to engage.

We completed two decision based-scenarios in the class. These scenarios are a surprise where proper mindset, target recognition, use of flashlight techniques, movement, and marksmanship are critical to success. We use photo realistic targets with a mix of threats and non-threats.

Several participants immediately engaged the innocent individual with one student (a retired peace officer) drilling the innocent man through the heart. Another student fired six shots at the innocent, missing him every time. When I asked her why she shot at the person, she said, “He scared me.” Some students were so fixated on the innocent that they admitted they never saw the man with the knife even though he was loudly demanding their money.

Two students who did notice the knife wielder tried to rapidly back away from him without looking where they were going—this despite my repeated exhortations in class to ensure you are pointing your feet in the direction you intent to move to reduce the possibility of falling. We had practiced low light engagement techniques for just such a circumstance; however, this practice did not translate into technique under stress.

A key lesson from scenario #1 touches on the legal aspect of using deadly force. Five of seven students shot at the innocent individual. One student’s comment of “he scared me so I shot him” is legally indefensible and likely represents an immediate trip to jail. Other students clearly violated the fourth firearms safety rule in that they did not take the time to know their target.

On a flat square range with no obstacles, you can get away with backing up and not looking where you are going. I see this all the time in competition and I believe that this behavior is a competition training scar. Backing up for more than a step or two in the real world creates a significant fall risk due to obstacles in the environment.

At home, noise coming from a young boy’s room. A female resident goes to the child’s room to see what is going on; however, she does not return nor does she respond when asked what is happening. The electricity to the house suddenly cuts off. As the student approaches the door, an unknown male immediately tells the student to come into the room. As the student looks into the room, on the right is a male with a pistol in his hand climbing into the room via a window and the female resident standing frozen in front of him. On the left side of the room, another male is holding a pistol to a young boy’s head. The student must solve the problem.

Several students tried to negotiate with the threatening home invaders. Of course, politely asking home invaders to leave or release their hostages is unlikely to enjoy much success. Playing the role of the threat, I started counting down while threatening to shoot the child. These students ultimately fired on the threats; however, once again technique went out the window under stress and the students achieved few hits.

One student shined her flashlight into the room, noted both violent criminal actors and the hostages, and then turned her flashlight off and stood on the side of the doorway. I started counting down while threatening to shoot the child. The student continued to stand frozen. When I asked why she was doing nothing, she replied that she did not believe she could make the shots. I knew she could if she concentrated and talked her through making successful hits.

A couple of students immediately responded to the threats and opened fire. Only one managed a peripheral hit, so the success rate for the engagements was very low. One assistant instructor completing the scenario held the flashlight in front of his face while shooting (and missing). I asked what technique he was using he replied, “Huh, I guess the nose technique?” One assistant instructor successfully completed the scenario and made his hits on the home invaders.

You must practice low light techniques to have any hope of using them under stress. As we’ve discovered, students simply don’t master the low light techniques from class--you cannot practice it once and get it down pat. Using a light in conjunction with a handgun is difficult and it requires practice. Thankfully, you can practice the techniques with live fire during daylight if your range will not allow night shooting.

So how do you practice engaging multiple threats and shooting on the move with these techniques? If your local range has IDPA matches, shoot the course of fire using your flashlight if the match director will permit it. Your score probably will not win the match; however, you will learn how to shoot and manipulate your pistol under some stress. Remember to practice turing the light on and off.

Practicing how to search a structure (like your house when nobody is home) in the dark is important as well. Do this empty handed, with a blue gun, or with an UNLOADED PISTOL (check it 3 times!). This helps you identify how the various angles and corners in your house make one technique a better option than the others.

To my knowledge, no data exists concerning private citizen-involved shootings with criminals under low light conditions; however, since a lot of criminal activity occurs after dark we can assume that there is a likely correlation. There are several reasons to use a flashlight: to observe and detect, to illuminate and navigate, to eliminate anonymity, and to identify and engage threats. Used properly, a flashlight lets you see danger before it can affect you and it can encourage the danger waiting in the dark to go elsewhere.

Posted by Sensible Self Defense at 2:21 PM