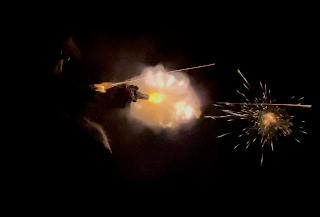 A friend and I have been evaluating the 20 gauge Rock Island Armory VR82 shotgun as an alternative to the commonly-used 12 gauge as a home defense shotgun. The 20 gauge Rock Island Armory VR82 may be an acceptable solution for smaller statured people. We are still experimenting with the VR82s and have not reached a solid conclusion concerning their suitability and reliability.

Over a couple of sessions, I fired five rounds of each manufacturer’s #1 buckshot load. Additionally, since I noticed the mis-labeling of 12 gauge commercial buckshot loads, I opened shells from all three manufacturers and measured the diameter and weight of the pellets. All actually contained #1 buckshot.

The pictures below show a representative shot from each load at the indicated distance--they are not to scale with each other.

At ten yards all of the loads demonstrated an acceptable pattern. The Rio load’s average pattern size at ten yards was 4 inches. The Monarch was 6.25 inches and the Nobel load was 8.5 inches. 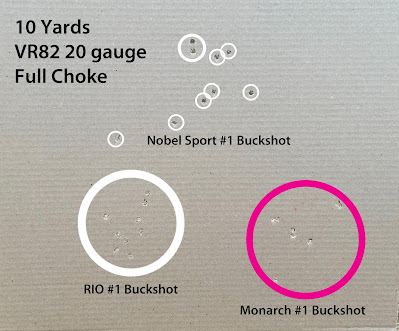 At fifteen yards, the Rio load opened up to an average of 9.25 inches. The Monarch load was 10.75 inches and the Nobel load was 11.5 inches. These are average measurements so the Monarch and Noble load did throw larger patterns. The Rio load was pretty consistent between 8-10 inches.

At twenty yards, the Rio load opened up to an average of 12 x 12 inches. The Monarch load was 22 x 14 inches and the Nobel load’s pattern was so large that I did not bother to continue with that round at that distance.

Within normal urban house distances, at ten yards and below all of the loads throw an acceptable pattern.  The Rio load is probably acceptable out to about 12 yards.

It is low light training season in Texas and I did the VR82 pattern testing on an afternoon just prior to beginning a low light practice session with a fellow shooter. As an experiment, we both fired Rio, Monarch, and Nobel loads in low light and after dark. The muzzle blast from the Rio and Monarch loads was pretty tame; however, the Nobel load’s muzzle blast was impressive.

That being the case, we recorded several examples of the Nobel Sport #1 buckshot load. I have seen flares of sparks when shooting shotguns (bird shot and buckshot) at steel targets previously, but these were impressive. I believe that it is some metal in the alloy other than lead causing the sparks. At the time we were shooting, I thought the streak of light in one of the stills was material coming back off the target. When I looked at the video I realized it came out of the ejection port. Also the flame coming out of the ejection port in one of the stills surprised me. I'm guessing burning powder grains.

Linked below are two short video compliations of a two-shot and a three-shot sequence with the Rock Island Armory VR82 20 gauge shotgun against steel targets just for fun.


Posted by Sensible Self Defense at 4:57 PM