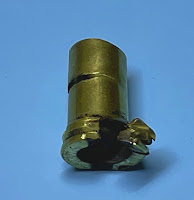 With the current ammo shortage creating challenges for many shooters, some are turning to reloads and or reloading. While reloading can be rewarding and fun, you must be very careful to follow proper procedures.

I was recently recording a shooter on video for training purposes when a round he fired had a substantially louder report and a great deal of smoke. The blast of smoke hit him in the face and he flinched away automatically. We looked at each other and both of us said almost in unison “Well that was not good.” (See picture sequence below)

I asked him if he was OK and he said yes. He only had some soot spots in several areas on his hands that coincided with openings in the Springfield XD-M grip such as the area around the magazine release button. The XD’s slide was jammed about halfway to the rear and the remains of the cartridge were still in the chamber. Later examination showed that the extractor was severely bent and blocking the slide’s movement. There was no obstruction in the bore.

He eventually disassembled the pistol and everything was intact except the extractor. The barrel showed no bulge nor was the frame cracked. The only damage to the frame was one spot where the rail had a small gouge.

We used a FreeBore to remove the cartridge case from the chamber. It was clear that when the round fired, the pressure completely ruptured the case and all but obliterated the head stamp. Two circumstances could cause this amount of over pressure, either the bore had an obstruction or there was too much powder (i.e. an overcharge) in the cartridge.

Reloading can be a safe and cost effective way to augment our ammunition supply; however, improper or inconsistent powder charges can cause serious problems. For example, when you fire a round with no powder or too little powder in the case you will typically have a bullet lodged in the barrel. If you hear a slight “pop” instead of a bang when firing a round, stop, properly clear the firearm, and make sure the bullet exited the bore.

With pistols and rifles, be careful about automatically doing a “tap/rack” and trying to fire another round during a match or in training. If the bullet did not exit, firing another round will create unsafe pressure that may cause a bulge in the barrel at best and may destroy the firearm and cause injury if the barrel bursts. I’ve seen shooters destroy four barrels (and two pistols) due to reloaded ammunition with no or too little powder in the case and the shooter automatically performed a “tap/rack.”

The other side to that coin is an overcharge. An overcharge can also destroy your firearm and may cause serious injury. If you believe you have overcharged a case and it got by you, you must not shoot any rounds in that batch of reloaded ammunition.

How do we prevent this? Consistency in the reloading process is critical. The ideal procedure when using a single stage press is to confirm that the powder measure is dropping the correct charge and is stable. Then visually confirm that the powder level is consistent in each case as you load. This is not always practical with a progressive or an automated reloading machine however.

When using progressive or automated reloading machines, I weigh the powder charge when I first begin the reloading process. I weigh as many powder charges as necessary to be certain that the powder measure is stable and dropping the correct powder charge before I begin reloading. I then stop and repeat the weighing procedure for every 100 rounds the machine loads. I do not mix that particular batch of 100 rounds with other rounds until I confirm that the powder charge is still correct. Although mildly tedious, this prevents me from loading hundreds of suspect rounds when vibration or other factors have caused the setting on the powder measure to drift slightly.

You must also be careful if you have a stoppage or jammed case in progressive or automated reloading machines. As you work to clear the jam, you can inadvertently cause the powder measure to drop another charge into a case. If this goes unnoticed, you can end up with an overcharged round. My solution is to completely clear all cases before restarting the machine.

Posted by Sensible Self Defense at 11:35 AM