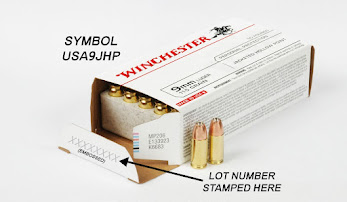 If you have purchased any Winchester, Browning, or Herter’s, or 115 grain 9mm ammunition after 25 March 2021, the ammunition may be subject to recall. (Note: apparently Winchester loads/loaded this ammunition for Browning).

According to Winchester, some lots of 9mm Luger 115 FMJ and JHP ammunition may contain propellant that may not properly ignite and burn when the cartridge is fired. Even if the cartridge propellant does not fully ignite, it may still generate enough pressure to cause the bullet to enter the barrel and lodge in the pistol's bore.  Commonly known as a squib, if the cartridge's failure causes a bullet to be lodged in the barrel, subsequently loading and firing another round with the bore obstructed will very likely cause firearm damage and may render the firearm inoperable or destroy it. It could also injure the shooter and potentially bystanders.

Since squib loads generally fail to expel the bullet from the barrel, you must use a metal rod or wooden dowel and some impact (e.g. a hammer or hard surface) to drive the bullet out before the firearm can be placed back into action.

I have witnessed a squib load result in the destruction of a pistol. The competitor believed she had failed to chamber a round when she reloaded the pistol, she then executed a Tap-Rack malfunction clearance, immediately came back on target, and fired another round. This round was noticeably louder (I heard the unusual report) and the pistol jammed with the slide locked in place. The Safety Officer said he didn’t realize the competitor had a squib due to the noise from nearby shooting bays and because the shooter’s body was obstructing the SO’s ability to see the pistol (a tight corridor in the stage—a poor stage design).

The competitor had trained herself (as many of us have) to clear the malfunction automatically. The Tap-Rack maneuver chambered a fresh round, which when she fired it blew the stuck bullet free, caused excessive pressure that bulged the barrel, stressed the slide rails out of specification, and jammed the pistol solidly in a partially open position. The local gunsmith had to cut the barrel in half to get the slide off the pistol. Smith and Wesson later x-rayed the plastic frame and determined that it was stressed as well—the pistol was essentially a total loss. If this happened in a self-defense situation instead of during a competition, the competitor would have had a serious problem; a problem only a backup gun could likely have solved.

So if you have any of this ammunition, go to the Winchester and Browning websites and determine if the lot numbers of your ammunition match the recall. Note: If ammunition was purchased before March 25, 2021, it is NOT subject to recall.

Shameless plug: We manufacture the FreeBore titanium squib removal tool and key chain designed to remove squibs, cartridges stuck in the chamber from a broken extractor, or jammed cartridges in a revolver. You can buy one here: FreeBore

I also did a video demonstrating what a squib sounds like and how to remove the stuck bullet: Squib

Posted by Sensible Self Defense at 7:33 PM