As I mentioned in part 1 of this article, I recently attended Tom Given’s Rangemaster shotgun instructor course—a very good class that I highly recommend. The class is a three-day course designed to train instructors how to teach techniques for handling and shooting the defensive shotgun under stress.

Some additional highlights and observations:

-- Always check your ammunition. Examine the primers, ensure that the shells are not damaged or corroded, properly crimped, and that the shell mouth has not expanded. Shotgun shells that have been in a tubular magazine for an extended length of time occasionally swell which may result in an inability to chamber the shell.

Ensure you are using ammunition of the correct gauge. This is particularly true if you own shotguns in several gauges which increase the potential to mix shells. Although many ammunition companies use different colored shells for different gauges, this is not always the case.

Tom mentioned the chance of mistakenly placing 20 gauge ammunition in a 12 gauge shotgun. The 20 gauge may slide down the barrel far enough that the shooter can load a 12 gauge shell in the chamber behind the 20 gauge shell and fire it with the obvious potential for catastrophic results.

Ironically, one of the students in the class had a gun that suddenly would not chamber a round. Examination showed that the barrel was obstructed with another shotgun shell. Considerable pounding with a cleaning rod produced a 16 gauge shell that entered and became stuck in the barrel. The student sheepishly admitted that he owned a 16 gauge shotgun. Both shells were the exact same red color and only a close examination would have identified the 16 gauge shell.

-- Are lights really necessary on a shotgun for home defense use? Not really. Tom discussed the benefits of simply leaving a light on in your home that illuminates any areas where an intruder might enter. As you think about it, under these circumstances you will likely see the intruder before or when he sees you. If the house is dark and you come into the area with a light, the intruder will immediately know your location; however, you may not know his. 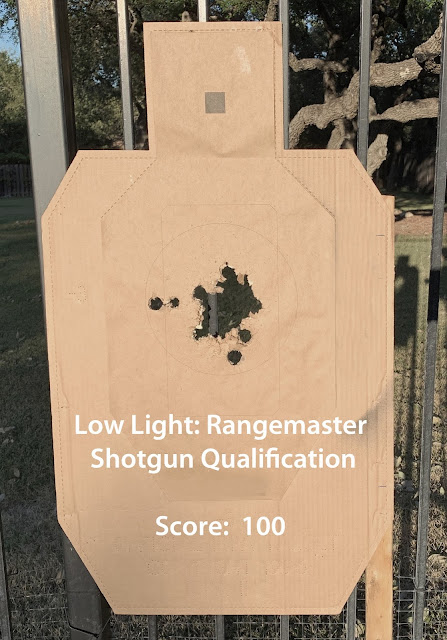 As an experiment, I completed the Rangemaster shotgun qualification during a recent low light practice session. I did not use a mounted light and instead held the light in my support hand alongside the shotgun’s forend. I scored 100% and completed all the strings of fire within the prescribed time limits with no problem. The paired holes are where the Federal Flitecontrol® wads struck the target.

Update: I have now mounted and use a light on my shotgun. Experiments in low light shotgun matches have shown that the gun-mounted light works very well.

-- "The 20-gauge is much easier to shoot than the 12-gauge, produces significantly less recoil, and is lighter and more maneuverable."* Like many others, I have always accepted the comment that a 20 gauge is better for small-statured people in a home defense role due to less recoil. However, as Tom discussed, a 20 gauge may not be better than a 12 gauge for home defense (and indeed other defensive applications). Although this may not have been the case at one time, modern low-recoil 12 gauge buckshot loads have less recoil than many modern 20 gauge equivalents.

Update: A student in one of my one-day shotgun classes arrived with a Benelli M1 20 gauge. He was not a small person (6'1", 180 pounds); however, he tapped out before the class was finished.  He told me the shotgun was beating him to pieces.  He ultimately repeated the class with a 12 gauge Beretta 1301.

I have always been impressed with the shotgun’s effectiveness and power and the Rangemaster shotgun instructor course reinforced my belief in the shotgun as a defensive tool. When employed correctly and within its proper range envelope the shotgun is very effective; however, trying to use it beyond its capabilities is an exercise in frustration. It is not a rifle and trying to make it one will result in disappointment. Remember, you are responsible for every pellet you fire.

Posted by Sensible Self Defense at 3:41 PM