This past weekend I sponsored Suarez International instructor Jon Payne for the Suarez Red Dot Pistol School at Cedar Ridge Range just north of San Antonio Texas. There are some of my observations.

As Gabe Suarez has stated many times, the red dot on a pistol is not for everyone. Although a quality red dot is not cheap and it does take practice to master its use, the red dot will enhance your capabilities as a shooter beyond what "traditional" equipment will allow. This is what many students in this weekend’s class learned.

Jon started the class with the mandatory medical and safety briefings and then we moved on to the theory and concept of the red dot system on handguns. We spent the first day doing drills and skill building exercises with no sights (i.e. sights taped), iron sights, and ended with the red dot. Jon worked with every student to ensure they understood and mastered their natural point of aim.

One thing that many novice shooters do not understand is that having a red dot sighting system will not fix a poor grip nor a poor trigger press. You must have mastery of the shooting fundamentals of grip, stance, sight alignment, sight picture, breathing, trigger press, follow through, and trigger reset. Once you do, the red dot sighting system combines and simplifies sight alignment and sight picture and enhances the shooter’s ability to make precise shots.

Jon then explained the two types of visual focus with a red dot and the visual hand-off between the iron sights and the red dot and we ended the day with additional drills using the red dot. 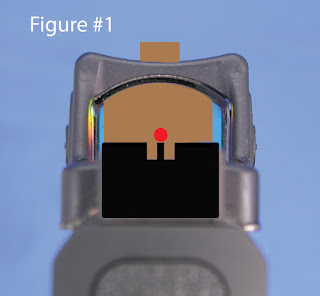 On day two Jon began with the tips and tricks for RMRs and some other red dot sights. We then continued skill building drills with a primary effort on developing the ability to quickly acquire the dot as you draw the pistol. Jon also had every student confirm their zero with their red dot sights. Figure #1 shows the perhaps the ideal iron sight and red dot relationship. However, you do not necessarily need to have the irons and red dot in exact alignment as many students initially believed. Figure #2 shows the iron sight and red dot relationship on my pistol. You’ll notice they are not in exact alignment; however, my iron sights and my red dot are both correctly, and independently zeroed for point-of-aim, point-of-impact with my carry ammunition—the two just don’t happen to coincide. 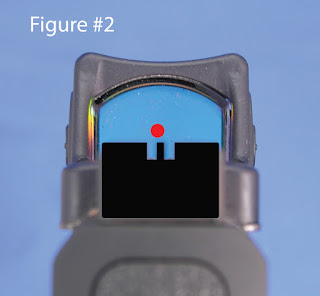 We then shifted to the steel bay and began shooting drills using steel targets. Jon had everyone do a clock exercise with their red dot to demonstrate a point that many students were finding conceptually hard to grasp—that once the red dot is zeroed, it does not matter where the dot appears in the window for you to hit the target. We started with the dot in the upper left as shown in figure #3 firing one shot. We then moved to the 12 o’clock position, then the 1 o’clock, etc. firing one shot from each spot in the window. All the shooter must do is place the dot on the target where she wants the bullet to impact and then properly press the trigger. The bullet will impact exactly where the dot is placed regardless of its position in the window or position relative to the iron sights. 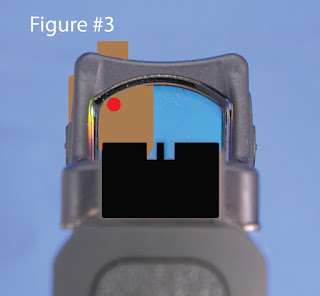 Day 3 saw more skill building drills and firing from awkward positions including 12 o’clock prone, side prone, sitting, and even a demonstration of firing the pistol upside down. In every instance, the students discovered that point-of-dot equaled point-of-impact provided the student did their part with the trigger press. In picture #2 you can see a student using side prone with the pistol oriented in a 90-degree angle firing at targets 45 yards away. Hits? No Problem.

We finished day 3 pursuing one of the class’s stated goals of every student being able to make head shots (a 6” x 6” square) on a silhouette target from 25 yards. Every student met that goal and many surpassed it. Several students were making consistent head shots at 45 yards, some doing it mirror image with their non-primary hand, and a few doing it one handed!

All in all, 3 great days of training and skill building. I’ve have taken several Suarez International classes with Jon and highly recommend him as an instructor. If you want to learn more about this class, tune in to episode 408 of Bob Mayne's HandgunWorld podcast which will be available on 26 February 2017.

To receive updates on future classes please subscribe at the link on the top right.

To train with Sensible Self Defense please go to the following link:

Posted by Sensible Self Defense at 6:45 PM