A Family of Pistols 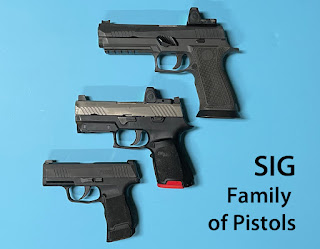 Have you considered the advantages of training, competing, and carrying pistols within the same family? I define a “family of pistols” as pistols that have similar grip angles, controls, sighting systems, etc. For example, Glock pistols, SIG P320’s and P365, 1911’s, and the Springfield XD series would all fall within the same family of pistols as would pistols from other manufacturers.

In late 2014, a friend of mine and I set a goal of shooting Master in every International Defensive Pistol Association (IDPA) Division. By the end of 2016 we achieved that goal within the divisions available at that time (six as of 2016—IDPA # A32998). Facing this challenge, we were generally practicing 1-3 times a week and firing an average of 200-300 rounds per practice session. We competed in the IDPA division that we were striving to master (no pun intended). As we achieved Master in each division, we moved on to the next. Through the course of our training, we developed a feel for the differences between the pistol types we were using in the different divisions and realized that staying within the same platform or family of pistols was extremely important for consistency.

For me this fact slammed home when I decided to experiment with a Glock 19 equipped with a Trijicon RMR while simultaneously training and competing with a Springfield XD 4-inch model with a match trigger and fiber optic sights. IDPA had no carry optic division at that time. Attempting to train with two different platforms set me back considerably as my brain tried to adjust to the differences between grip angle, sighting systems, slide and magazine release locations, etc. for the two different pistol families. Rather than progressing, my shooting actually began to suffer. I stopped using the Glock and concentrated on training with the XD.

We both routinely carried concealed and realized that our carry pistol and holster needed to match the IDPA Division we were working on or we were very likely to foul the draw if we had to present the pistol in a self-defense situation. We started carrying revolvers when we were working on the Revolver Division, Back Up Guns when training for that division—you get the idea.

After completing the IDPA master challenge and competing in the 2016 IDPA Nationals, I focused exclusively on improving self-defense skills and maintaining skill with my carry pistol for the next couple of years. I set up two essentially identical SIG P320 carry pistols with the same sighting system, holster, and trigger pulls. I trained and competed with one pistol and carried the other, rotating the pistols and carry ammunition every six months. I used the old carry ammunition to reconfirm the new carry pistol’s zero. I used my training pistol and my every day carry (EDC) holster in all of my practice, training, and competition.

The same concept applies to holster tilt, angle, positioning, and other characteristics. Ideally, the holster should be in the same place and approximately the same height on the belt for competition and carry. My EDC concealed carry holster rides higher on the belt and is not as fast as typical competition holsters which generally sit 1-2 inches lower. I once discovered that after a period of training for competition that I often missed my draw with my EDC holster when my hand automatically went to the lower location where the competition holster would have been on my belt. This poses a challenge to those who wish to use appendix or abdominal carry since many competitions do not permit appendix carry for liability reasons. Consistent and routine dry practice with your appendix carry rig is very important if you compete with a strong side holster.

Another option is to compete with and carry a holster that meets IDPA standards. For a number of years my EDC holster was the same IDPA-legal holster I used in competition. I eventually found this to be problematic because it protruded far enough out from my belt that I routinely bumped the pistol/holster into things. I stopped using the IDPA holster in favor of one that pulled the pistol closer to my body and solved this problem.

Choosing a pistol family and then sticking within that family for competition and carry will go a long way toward improving our shooting skills. I routinely see students and competitors practicing, training, and competing with multiple pistol families and holster positions. They will bring a SIG P320 X5 to a class, use a 1911-based fully tricked out race gun with optic in competition, and then carry a Smith and Wesson Shield in an inside the waistband holster. Several years ago I had a student attend multiple classes and he brought a different pistol family to every class. Needless to say, he never mastered any pistol and his shooting ability did not appreciably improve.

Regardless of your shooting goals and which method of carry you chose, consistent and regular dry practice with your ECD pistol family and holster will ensure that it is where you expect it to be if you must draw it in an emergency.

Posted by Sensible Self Defense at 5:56 PM