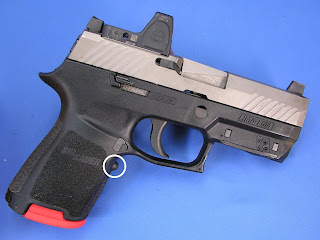 In January 2019 the Federal Bureau of Investigation (FBI) adopted a new qualification course for its agents.  This new course is somewhat different that the one the FBI adopted in 2013 which itself represented a substantial departure from the older FBI qualification.

Inexplicably, although the 2013 qualification required all draws from concealment, the Bureau dropped this requirement for the 2019 qualification.  Given that FBI agents generally wear plain clothes and carry concealed, this seems counter intuitive (they did not ask my opinion however).

The January 2019 qualification uses an FBI QIT-99 silhouette as follows:

Scoring:Shooters receive 2 points for every round that lands inside the Q99 target outline.  There is no disqualification or penalty for hitting outside the bottle or for missing the target entirely.

Well everyone and their brother is shooting and pontificating about this new qualification, so . . ., we decided to shoot the FBI qualification under low light conditions with different light systems. We did not have the QIT-99; however, the QIT-97 bottle is the same size so not an issue.

I shot a control qualification in daylight (picture 1), with all draws from concealment scoring a 100. I shot everything within the prescribed time limits with no problem.  I then shot a low light qualification (very dark night) using a handheld flashlight (picture 2).  Given the requirement that you switch hands mid-string, I could not use a light for the 3-yard string and essentially used point shooting. I dropped two shots at 3-yards (weak hand) for a score of 96. 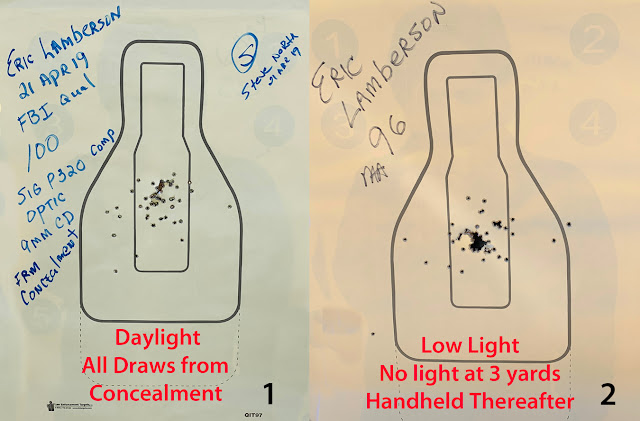 I then shot a low light qualification (picture 3) using a handheld flashlight to initially identify the target and then using a pistol-mounted light for the actual target engagement.  Pistol mounted lights with the proper switch configuration can make hitting a target under low light conditions easier. However, learning the tighten/relax grip to turn the light on and off requires practice—particularly for someone accustomed to maintaining a firm firing grip on the pistol. 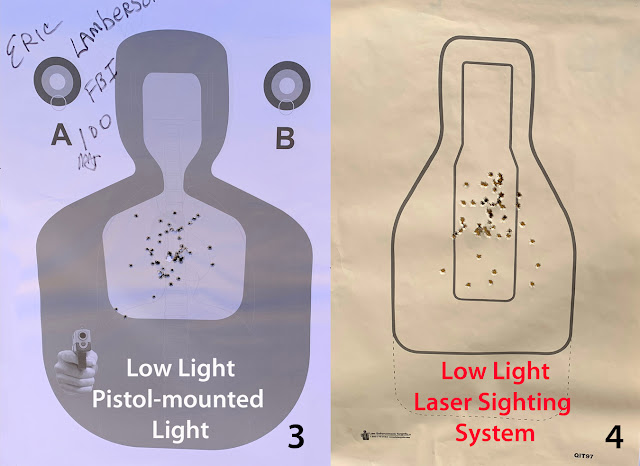 In my classes, I always require everyone to master hand held light techniques before I allow them to use a pistol-mounted light for several reasons. Searching with a mounted light virtually guarantees that you will point the pistol in an unsafe direction at some point. For that reason, I ask shooters to search with their hand-held light (as I did in this qualification) and then to release it and go to the pistol mounted light once they identify a threat. I used a San Antonio, TX police target for this qualification and scored a 100.  Even though the target was different, all shots would have been in the FBI QIT-97 target bottle.

Finally, I used the SIG P320 Lima Laser system (with a green laser) to fire the last qualification using the laser sighting system at 3-yards and then a handheld flashlight in combination with the laser thereafter (picture 4).  Although I used the SIG P320 Lima system, I believe any laser sighting system with a grip switch (see picture below) on the market would have worked equally well. I scored a 100 on this qualification also. 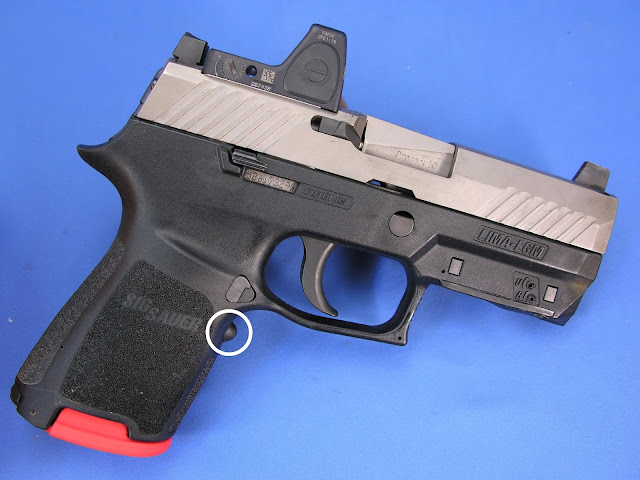 The one issue with firing the FBI qualification under low light conditions is the string of fire at 7-yards where you fire 4 rounds, reload the empty pistol, and fire 4 more rds in 8 seconds. I do not believe it is possible to do this with a handheld flashlight within the 8-second time limit.  My normal reload for a semi-automatic pistol is 2.0 – 2.5 seconds, so 4 reload 4 in 8 seconds is no problem.  With a handheld flashlight my reloads averaged 5.5 seconds so 4 reload 4 is problematic when you must release the light, reload, recover the light, reacquire a firing grip, and then engage the target.

This was the first time I used the Lima system in low light (very dark night w/ no moon) and I was very impressed.  It does require a purpose-built holster; however, with a such a holster it carries very well.  I think the laser in combination with a with a handheld flashlight will make a superb low light system.  In a couple of weeks I am teaching a low light, close range gun fighting class and I look forward to seeing how the Lima works under these conditions.

If you enjoy reading these please subscribe. The link is on the upper right side of the page. All that will happen is that you will receive an e-mail when I post an article. Your information will never be distributed.
Posted by Sensible Self Defense at 6:50 PM