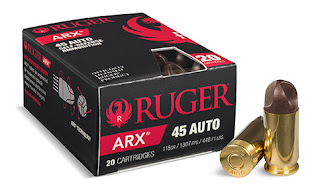 Although generally the same length as conventional bullets (the ARX .45 and the standard 230 gr 45 RN are exactly the same length), PolyCase’s injection-molded bullets are significantly lighter.  As a result, Ruger ARX rounds exit the barrel at a higher velocity, have a flatter trajectory, subjectively less felt recoil, and a decreased potential for ricochets.

Although there has been a lot of discussion concerning the new Ruger/Polycase ammunition, discussion of accuracy potential was absent. Curious, I resolved to correct this oversight.

I tested the accuracy and measured the velocity of Ruger/Polycase .380 Auto, 9mm Luger, 40 S&W, and .45 Auto rounds.   I placed the target at 15 yards--the outer limits of a typical self-defense scenario and used a Shooting Chrony Gamma Master® Chronograph to measure the velocity (15 feet from the muzzle). Given that I do not have a ballistics lab (sigh) I verified the Chrony’s measurements using .45 Match ammunition with a nominal velocity of 820 fps. A ten-round sequence of the .45 Match ammunition resulted in an average velocity of 823 fps—close enough.

I fired all rounds from a bench rest over sandbags and was pleasantly surprised with the Ruger/Polycase ARX’s accuracy potential.  The enclosed table shows the results of the testing with every caliber demonstrating better than acceptable accuracy and the .45 Auto ARX load providing an impressive 7/8 (0.875) inch 6-round group (see picture). 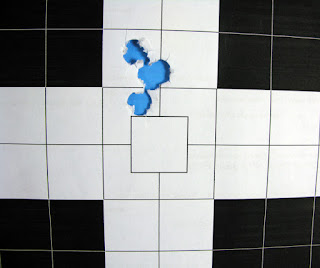 From typical carry pistols the recorded velocities were less than the advertised velocities for each caliber. This is often the case because the manufacture normally uses special barrels for velocity testing.  However, I did have one exception—the 45 Auto rounds from a 5-inch barrel clocked an average of 1396 fps for ten rounds versus an advertised velocity of 1350 fps.

I was also curious about ARX bullet fragmentation when striking a steel plate with a 90-degree angle.  Polycase states that ARX bullets are tougher than traditional frangible bullets, but still readily break up when impacting hardened steel, resulting in a lower ricochet potential in most shooting situations. Lead and copper bullets when striking steel at 90 degrees explode into fragments that generally spray in a 360-degree circle from point of impact—many of these fragments are large enough to pose a danger.  Using a video camera at 250 frames per second, after a couple of tries I captured the instant of impact for an ARX 45 Auto round.  The video clearly shows that the bullet exploded into extremely small fragments and copper dust, very similar to what you see with a standard frangible bullet.

As far as shoot ability and felt recoil is concerned, the .380, 9mm, and 40 S&W did seem to present less recoil than a typical high velocity factory self defense round.  When it came to the ARX 45 Auto round, I personally could not tell the difference between its felt recoil and that of a CorBon® 185 grain DPX®.  I experienced no failures to feed or to eject with any of the calibers I tested.

I made no attempt to shoot the AX bullets into ballistics gelatin.  Polycase has done this testing and posted a video at the link below.  A number of writers have also performed gelatin tests with similar results.  I suspect that the ARX would have penetration challenges if it struck a heavy bone—but then traditional jacketed hollow-point lead bullets face this challenge as well.


Gelatin test: https://www.youtube.com/watch?v=Kv5l33yPC60
Posted by Sensible Self Defense at 4:41 PM