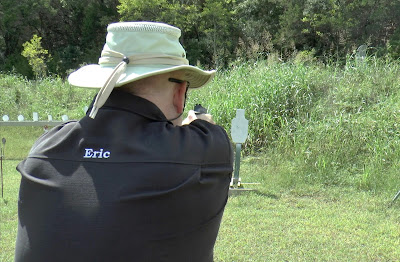 A squib load is a round that fires immediately upon impact of the firing pin; however, the round’s propelling energy is less than what is necessary to push the projectile out of the bore. This results in a bullet being lodged somewhere between the chamber and the muzzle--a condition that could cause damage to the firearm or serious injury should you fire another round with the bore obstructed. With many squibs, you will only hear the light "pop" of the primer firing and a puff of smoke as shown in the picture just behind the slide.
Although squibs are usually the result of faulty powder charges and these often from careless reloading, they can happen with any ammunition. I've seen squibs in questionable factory ammunition (from those countries), reloads with contaminated powder or insufficient charge, and older factory ammunition that was stored incorrectly, contaminated at some point, or whose powder or primer has deteriorated. Since squib loads generally fail to expel the bullet from the barrel, you must use a metal rod or wooden dowel and some impact (e.g. a hammer or hard surface) to drive the bullet out before the firearm can be placed back into action.

A while back during an IDPA match I witnessed a squib load result in the destruction of a pistol. The competitor believed she had failed to chamber a round when she reloaded the pistol, she then executed a Tap-Rack Type 1 malfunction clearance, and immediately came back on target and fired another round. This round was noticeably louder and pistol jammed with the slide locked in place. The Safety Officer didn’t realize the competitor had a squib due to the shooter’s body obstructing the SO’s ability to see the pistol (a tight corridor in the stage) and the noise from nearby shooting bays.

The competitor had trained herself (as many of us have) to clear the malfunction automatically. The Tap-Rack maneuver chambered a fresh round, which when fired blew the stuck bullet free, causing excessive pressure that bulged the barrel, stressed the slide rails out of specification and jammed the pistol solidly in a partially open position. Smith and Wesson later x-rayed the plastic frame and determined that it was stressed as well—the pistol was essentially a total loss. If this happened in a self defense situation instead of during a competition, the competitor would have had a serious problem; a problem only a backup gun could likely have solved.

How do you identify a possible squib?

The key indicator of a squib round is a quieter than normal report when the firearm fires. It is much quieter than a normal round and often it is just the sound of the primer popping. If you hear a gunshot that is significantly quieter than normal, stop and check for a blocked barrel. Squibs can happen with any type of cartridge including those fired out of rifles, shotguns, or pistols.

In this video I set up two squibs. One with a P320 in 9mm and one with a S&W M&P .45 ACP. I demonstrate what the squib sounds like and show how to clear the bore with a FreeBore tool. Click Here for the Video

What should you do if you suspect a squib?

STOP SHOOTING! You don’t want to take the chance of an obstructed barrel blowing up your gun and injuring you or someone else if you continue firing. Unload the gun and inspect the barrel to determine if the bore is blocked. If firing a rifle and a bullet is stuck in the barrel, use a cleaning rod and a mallet/hammer to drive it out of the barrel. I normally do this from the receiver end if the rifle design permits since the bullet is oriented that direction. After you get the bullet out, inspect the barrel for any bulges, cracks, or deformities. 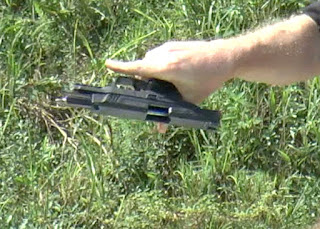 If firing a pistol, use a FreeBore or similar tool to drive the bullet out. You can see a FreeBore in the picture on the right. No obstruction in the barrel.

If this occurs during a match STOP SHOOTING! Clear the pistol bore and restart the stage. The potential consequences of a blown-up pistol are not worth the risk. It is a match after all--no one is shooting at you.

If a squib occurs during a self defense situation--go to your back-up pistol if you are carrying one. Otherwise, drop the magazine (retain it if it is your only one) then use your FreeBore or a similar object to check the bore. If it is obstructed, drive the bullet out, reload, and continue as appropriate. Obviously not the best of circumstances so carrying quality factory ammunition and rotating your ammunition periodically is a great idea.

Shameless plug: We manufacture the FreeBore. If you wish to purchase one click here: FreeBore.

The FreeBore is solid titanium and will go into pistol bores of 9mm or larger. If you have a squib, unload the pistol, insert the FreeBore to confirm that you have a bore obstruction, and whack out the bullet.

The FreeBore is strong enough that it will not be damaged nor will it damage the rifling. It also works as an emergency tool for dislodging jammed shells in a revolver, an autoloader with a broken extractor, or freeing stuck mechanical parts.

The FreeBore will carry your keys as well. I have discovered (as many before me have) that having your keys on a rod to slip inside your pants with your keys does several things: it frees up a pocket, it makes your keys more accessible with either hand, and it holds them securely (unless you must go to half-mast—then stick it in your pocket for the duration).

Although it looks like and could function in a manner similar to a kubotan, persuader, or like device, the FreeBore is not designed to be a weapon.  Regardless, the laws in some states (including Texas) might consider the FreeBore a weapon depending upon the totality of the circumstances surrounding its use outside of its intended purpose.

Posted by Sensible Self Defense at 9:58 AM