Is Stand and Deliver a Good Idea? 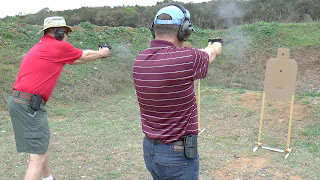 Those who are familiar with the modern technique understand the concept of Stand and Deliver. This is the tactic of the good guy, upon seeing a lethal threat, immediately and rapidly drawing his pistol and placing effective fire on the bad guy—before the bad guy can react.

Action versus reaction—we’ve all heard it, but is it true? I think there is a fundamental flaw with this technique--in reality; your action will rarely beat their reaction if the bad guy is paying attention and committed.

One of the drills we do in force on force training is for each student, one with pistol drawn, the other drawing their pistol to both attempt to shoot each other with Airsoft while standing in place. In the force on force drill each student invariably shoots the other with a little plastic pellet; however this is not what happens in real life.

We recently conducted an experiment with 100 different trials. We had four participants: one advanced shooter, one intermediate, one somewhat trained, and one basically untrained. The advanced shooter has studied the modern technique for 30+ years, attended close range gunfighting and force on force courses, and is an affiliated instructor with Suarez International. The intermediate shooter has attended a couple of modern technique classes and is an IDPA sharpshooter. The somewhat trained shooter has attended no formal instruction and is an IDPA Marksman while the basically untrained shooter has had no formal instruction and only limited experience drawing and firing a pistol from the holster.

The experiment has two shooters standing side-by-side, one drawing and shooting a target 3 meters down range. The shooter drawing from the holster (good guy) starts with his hand on the pistol grip, draws his pistol when he chooses, and fires one shot at the silhouette. The other shooter (bad guy) starts with his pistol aimed at the head of a silhouette target (also 3 meters away); reacting and firing when he sees (using peripheral vision) the good guy draw his pistol. In 98 out of 100 trials, the bad guy with his pistol aimed at the head of his target fired and hit first. Only once did both shooters fires simultaneously and only one time did the good guy fire first.

Observers of our experiment often thought both shooters fired simultaneously; however, that was not the case. The shortest split time between the bad guy firing and the good guy firing was .017 seconds or 17/100s of a second. However, even in this short timeframe the good guy's finger was not on the trigger and his pistol was not yet on the target when the bad guy fired. So unlike Airsoft where both get hit with a little plastic pellet, in the stand and deliver mode the good guy gets hit in the forehead with a bullet and never fires a shot in 98 out of 100 times. The bottom line to these numbers--if you attempt to stand and out draw your opponent and the bad guy is paying attention, then his pistol muzzle is likely the last thing you will ever see.

The solution is to move, draw, and shoot—-in that order. When I first began practicing the skills I learned in Close Range Gunfighting, I genuinely believed that I was moving and then drawing and firing my pistol. The video proved I was not and I discovered it takes some effort to overcome this tendency. Based upon our experiment, the time I was taking to begin my draw before I started moving would have likely resulted in me taking a bullet.

I believe this is a common training scar associated with those who have only received traditional square range training or (surprisingly) those regularly shooting IDPA. I believe IDPA courses of fire or stages that require moving while shooting over a short distance encourage this bad habit; the way these stages are typically designed, if you move first and then draw you either must slow down or you do not have time to fire the shots. 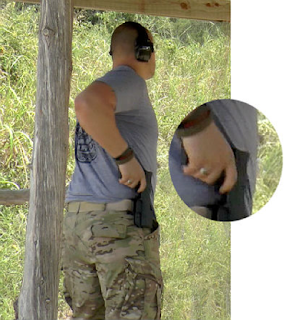 One final word. If you wish to replicate this experiment, ensure that your participants have the trigger finger discipline and skill to rapidly and safely draw their pistol. Newer shooters often place their finger on the trigger too early in the draw stroke and end up with unintended discharges.

Posted by Sensible Self Defense at 6:29 PM