Any Doubt? Put Your Hand on the Pistol 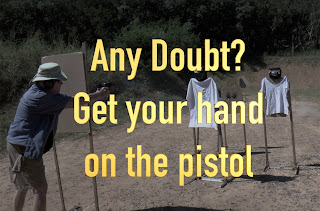 reasons.  However, I do see a side benefit to the open carry because someone seeing you simply place your hand on the pistol (without drawing) would is not a violation of the law as it was in Texas prior to open carry. *


Why is this important?  Joan N. Vickers and William Lewinski published research on police officers performance under pressure in “Performing under pressure: Gaze control, decision making and shooting performance of elite and rookie police officers.”** Vickers and Lewinski discovered that more experienced police officers placed their hand on their pistol and often drew their pistol earlier in a confrontation and thereby gained precious time in responding to a threat—often shooting before the threat could fire at them. Unlike a police officer however, a private citizen cannot simply draw his pistol at any perceived threat without risking arrest.


In any event, after reading the Vickers and Lewinski research I started collecting data to determine how much of a time advantage was gained by placing your hand on the pistol versus starting with your hands in some other location (e.g. hands at sides). My goal was to determine how long it took a competitor (granted, not necessarily the average private citizen licensed to carry) to draw and fire single shot.


We have timed the draws of 264 individuals over a period of several years during our local IDPA and Short Range matches. We have measured 1,843 specific instances of drawing the pistol and firing a shot from concealment, 967 draws with the pistol not concealed, and 892 instances when the competitor started with their hand on the holstered pistol. We only included instances where the competitor's shot stuck inside the -1 or 0 of the standard IDPA target in the data set.


The skill level of the competitors varied from new shooters participating in their first practical match, Novices, Marksmen, Sharpshooters, Experts, and two Masters--unfortunately we have few Master class shooters in our local matches. This video (click here) shows me drawing and shooting in a Short Range Match replication of a robbery in a Tampa convenience store.  The first number the Safety Officer reads from the timer is the total time for the string of fire.  The second number is the time from the beep to the first shot or the draw time. My draw time for the first string from concealment is 1.33 seconds. My draw time for the second string from concealment; however, with my hand on the pistol is .73 seconds.  The time difference with my hand on the pistol was .60 seconds.


We have discovered that for all experience levels, placing your hand on a pistol concealed or openly carried early in a dangerous situation can provide an average of a .74 – 1.25 second time advantage (depending on the individual skill level) if you must draw compared to starting with the hands in some other position.  This is not trivial—3/4th of a second to 1.25 seconds faster can be a lifetime in a deadly confrontation.

For more information go to:  www.sensibleselfdefense.com

* Is placing your hand on a holstered pistol a violation of the law as long as the pistol remains in the holster?  I’m not a lawyer and this is not legal advice; laws vary by state—check your local laws as appropriate.


**You can find this article on the Force Science website at:


https://www.forcescience.org/2009/10/major-new-study-how-your-eyes-can-cast-your-fate-in-a-gunfight-part-1/
Posted by Sensible Self Defense at 11:18 AM